Horse racing isn’t just a hobby for a Metis racer: it’s a lifestyle he was born into.

It was five years ago that Wyatt Sinclair from MacDowall, SK started to compete in the Prince Albert Professional Chuckwagon & Chariot Association (PAPCCA). Following the footsteps of his father and uncle, Sinclair chases that adrenaline of racing.

“My family’s been racing since they were my age,” said Sinclair. “My dad Warren is someone I look up because I’ve been watching him since I was little and everybody says I drive like him.” 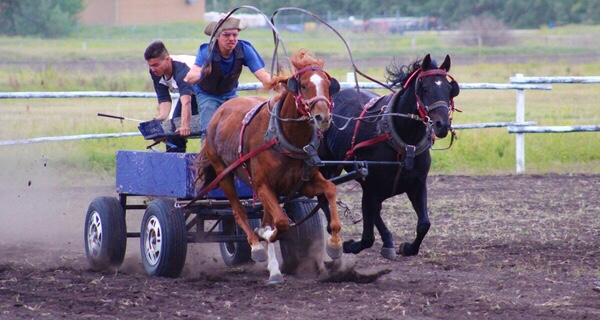 Wyatt Sinclair competed in Beardy’s Sports Day this past weekend racing in chuckwagons and chariots. Photo by Jeanelle Mandes

The 19-year-old racer said every time a race starts, he gets all jittery and worked up. But once he hears the horn blow, that feeling goes away. He won a couple of shows this year but said racing has its challenges. A couple of weekends ago, Sinclair got into a bad wreck on the race track in St. Louis. But that experience didn’t scare him from doing what he loves.

“My lead team hit another wagon and I crashed on the second corner…I went backwards on the track and went through the fence,” he said. “The horses and I were alright. I was [more less] worried about my horses because I knew I was alright.”

Sinclair said he dedicates his summers to racing and traveling throughout the prairie provinces to different shows.

He joins other racers such as George Sanderson from the James Smith First Nation who has been racing for over 45 years. He has won numerous chariots and chuckwagon championships throughout the province.

“It was something to do. There was nothing to do back then but just horse racing,” said Sanderson. “The whole family comes to shows and it keeps everybody out of trouble and that’s the best thing.” 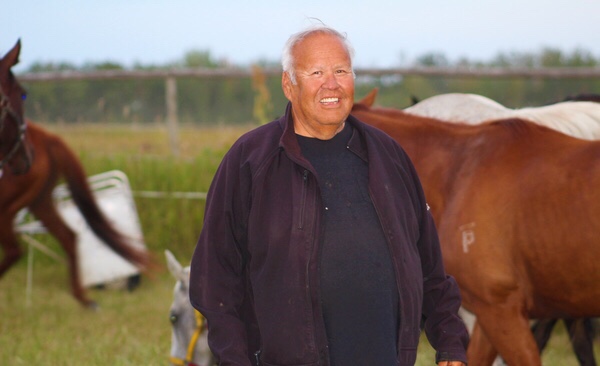 Sanderson has travelled throughout North America to compete and has won many shows. He said the main challenge he faces is trying to make the horses work together as a team which can have consequences.

“I rolled a few times last year and broke my collar bone,” he said. “But it didn’t scare me, I just kept .”

Sanderson has taught his family and some community members how to drive and it gives him pride to hand down knowledge he holds a passion for.

He gets his inspiration from champion chuckwagon racer Keith Wood from Saddle Lake, AB who has set the track records in this sport. Sanderson hopes to continue travelling every summer to compete in various shows for years to come. He shares some advice for those who wish to get involved in a fun summer sport.

“It’s a lot of work but it’s good work,” he said. “Work with your horses, look after them and they will run for you.” 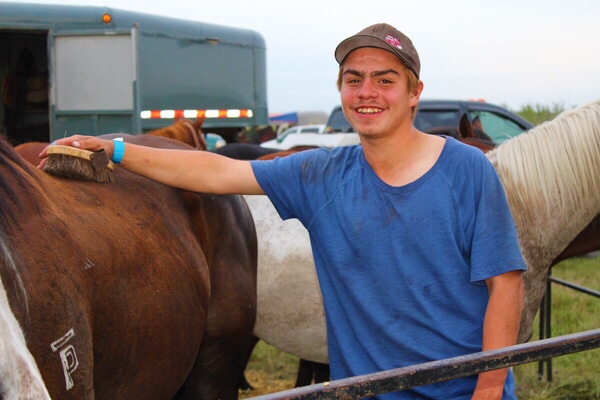 19-year-old Wyatt Sinclair was born into the world of horse racing and loves it. Photo by Jeanelle Mandes

Sinclair and Sanderson will be racing in the final PAPCCA show this coming weekend in Duck Lake. Both are hoping to gain a memorable experience to end the season. The PAPCCA has about 200 members from Saskatchewan, Alberta and Manitoba.