Huskie track Father and son duo do well in Winnipeg

Metis athlete Kieran Johnston was representing the University of Saskatchewan Huskies at the Canada West Track and Field championships in Winnipeg at the end of February. His father, Todd, is the Assistant Coach of the Huskie Women’s Track and Field Team.

Kieran Johnston was the lone gold medalist for the Huskies, earning gold in the Men’s heptathlon and the silver in the 60­meter hurdles race. Then dad Todd earned the hardware for being the Assistant Coach of the Year for the Huskies Women’s’ team at the Canada West Track and Field awards banquet.

Kieran stated that so far, he has had a “really good season, I’ve had a really good training season and the first half of the season was pretty good. Today was not as good but I am pretty optimistic going into the CIS championships.” 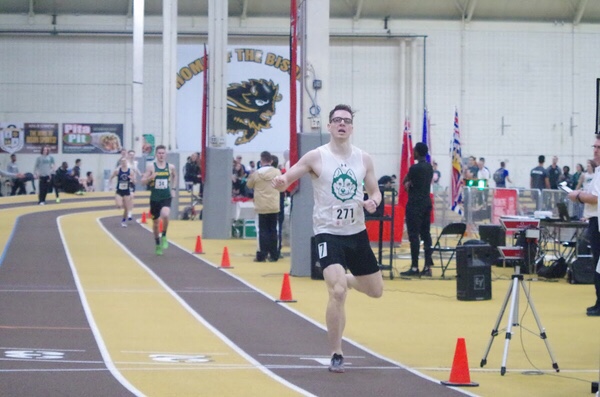 Kieran Johnston earned gold in the Men’s heptathlon and the silver in the 60­meter hurdles race at the Canada West Track and Field Championships.

However, before the season started, Kieran also took part in the classic musical “Rocky Horror Picture Show”, where he played the part of the initially shy Brad. When asked about the experience, Kieran says it was “super fun, it was a great show, I loved it. It worked out pretty well this year because of the timing of Rocky and it was really early in the year, we put the show on in October, so it didn’t interfere with training too much. then I just made the decision right at the start of our preparation for “Rocky” that, after “Rocky” was done, I was just going to take a break from acting for a while and just focus on track.”

Track and field is something which runs in the family, as his father Todd Johnston is the assistant coach of the Huskie women’s track team. The Huskie Women’s track and field team came away with the Women’s team title. Congratulations to both Kieran and Todd for earning their well-­deserved honours.

Everyone who earned gold and silver medals, as well as meeting the national standards, will be competing at Nationals in Windsor March 8th through to the 10th.