Northern Saskatchewan Football has had a fantastic two weeks of action. 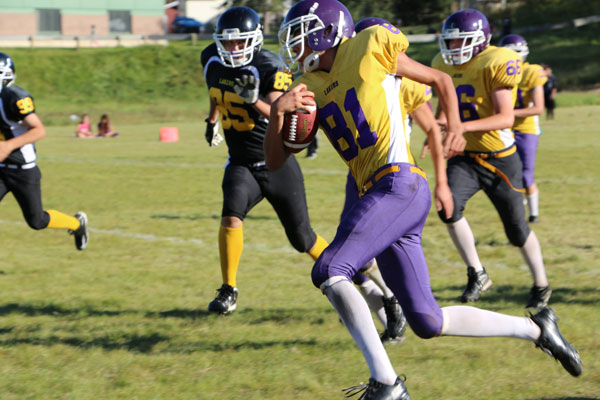 Kolton Janvier from the La Loche Lakers who ran back two kick returns for touchdowns. Photo by Darcy Ahenakew

Kicking off the season on September 8, the La Ronge Churchill Chargers got off to a quick start and held off the hometown Sandy Bay T-Wolves by a score 56-24. Leading the Chargers was David Kopeck who scored three touchdowns.

On Wednesday, September 14 two games were held. Pinehouse held the Laker Bowl, with the hometown Lakers, taking on the visiting La Loche Lakers. Pinehouse got out to an early lead with two quick touchdowns by Dray Tinker, and later added six kicking converts. Kolton Janvier ran back two kickoffs in reply for La Loche, however Pinehouse went on to a convincing 78-18 victory. Meanwhile, at the Lac La Ronge Indian Band, the visiting Cumberland House Islanders were too much for the Senator Myles Venne Huskies with a 96-6 victory. Zaine Fiddler scored a league leading six touchdowns while Dwayne McKenzie converted on ten kicking converts to lead the Islanders.

On Thursday, September 15, the Creighton Kodiaks travelled to Sandy Bay to take on the T-Wolves. The defending 2A champions have a new look this year, after having a large number of players graduate the previous season. The Kodiaks got out to a quick 16 point lead, but the T-Wolves never gave up and worked hard all game defeating the Kodiaks by a score of 45-22.

Looking ahead at week three of Northern Saskatchewan Football action, the Pinehouse Lakers will travel to Beauval on Wednesday. On Thursday, two games will be held. The first game will see the Creighton Kodiaks host the Cumberland House Islanders. The second game will be Northern Saskatchewan Footballs first game ever under the lights, where the La Ronge Churchill Chargers will welcome their cross town rivals the Lac La Ronge Indian Band’s Senator Myles Venne Huskies. Good luck and safe travels to all teams.