Twenty-nine countries have made their way to Treaty 6 territory in Alberta for the 2nd World Indigenous Nations (WIN) Games. The games kicked off July 1st with a feast and a round dance in Enoch Cree Nation and ended with fireworks in the evening. Each day began with a sunrise ceremony where competitions in spear-throwing, swimming, bow and arrow, foot races, tug of strength and other contemporary sports followed. The opening ceremonies were held at Bear Park in Maskwacis, Alberta where all tribes from the participating countries walked in the arbour performing their cultural dances.

“The opening ceremonies was pretty powerful. It was like a grand entry and Canada was the last to enter the arbour,” Landon Sasakamoose said. “All these other countries were doing their own dance with their own drums and their own singing…I really liked that.” 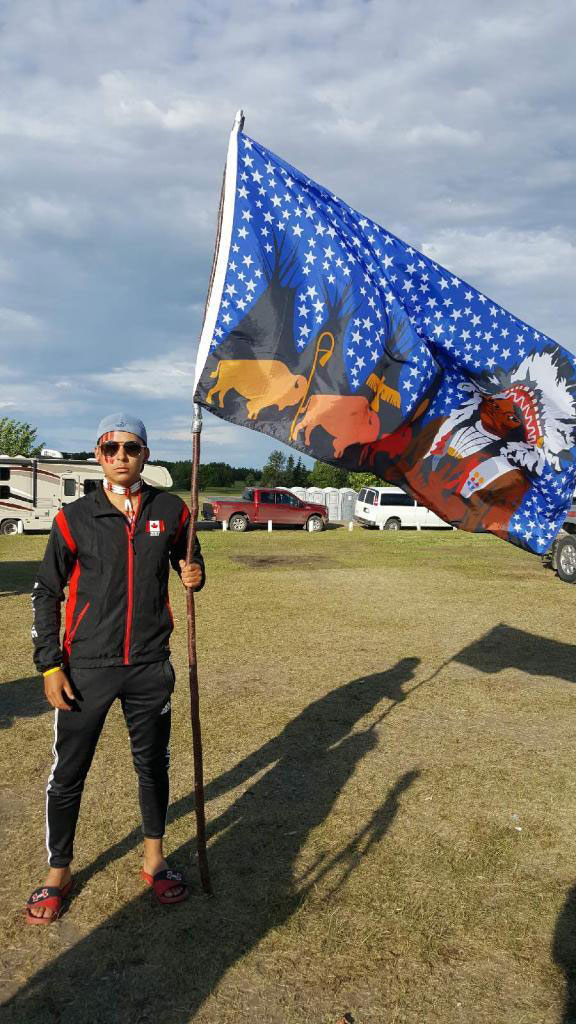 Landon Sasakamoose, 18, participated in his first WIN Games in the bow & arrow and the foot races sporting events. He hopes to take home the first-place medal and be named the fastest Indigenous athlete on earth. Photo by Utin Ahenakew

Check out more photos from the World Indigenous Nations Games in our photo gallery.

Sasakamoose from the Ahtahkakoop Cree Nation is competed in the 50-metre and the 100-metre dash and also in the traditional archery event.

“I went to the archery venue and signed up for archery. I was shooting bullseye left and right,” he said. “The day of the competition, we got three practice rounds and three official shots. I don’t know what happened. I just choked because there were so many eyeballs on me like people from Panama, Paraguay and New Zealand.”

Even though he didn’t get the shots in archery, he did it for the experience. Sasakamoose focused on his upcoming races in the games. It was the sporting event that he trained himself 2-3 times a week for the past two years. Sasakamoose was two days late in getting his Visa in the last WIN Games held in Brazil which resulted with him missing out the first WIN games. But since then, he made it his mission to train himself hard to compete in the games.

Sasakamoose is part staff as well where he helped set up the tipi village in Enoch. Being a part of the WIN Games has been a great experience so far for the running athlete.

“There’s many cultures here that I’ve never seen. It’s my first time ever seeing that in person,” he said.

“Eighty percent of the people I see here can’t speak English. You have to do hand language with …it’s pretty fun though. I like it.”

Reilly Checkosis from Littlepine First Nation is also part of the WIN Games event staff where he helped to get venues ready and prepared for the various sporting events and cultural games that took place.

“What we have set up in Enoch is a tipi village…we gather there nightly and we do different cultural events,” said Checkosis.

He added the Maori people perform the haka dance nightly and the Dene people from the Northwest Territories demonstrated their traditional games including the push pole which is an old Inuit game.

The winning athletes were awarded beaded medals before the closing ceremonies on July 9th.