Gearing up for the North American Indigenous Games

The North American Indigenous Games (NAIG) is just around the corner. The games will start on July 20 where the Opening Ceremonies will be taken place at the Mosaic Stadium starting at 2 o'clock.

The Opening and Closing Ceremonies coordinator, Tessa Desnomie, says she is super excited to see the line of performers and entertainment.

"All of the entertainers that we have booked for opening and closing ceremonies have been super excited to be a part of this event. I think they all realize the importance to our youth and our athletes and to be a part of something special," she says.

The speeches at the opening ceremonies will be pre-recorded and they will be played on the jumbo-tron. The only live speakers will be an elder for the opening prayer and a dignitary to declare the games open. 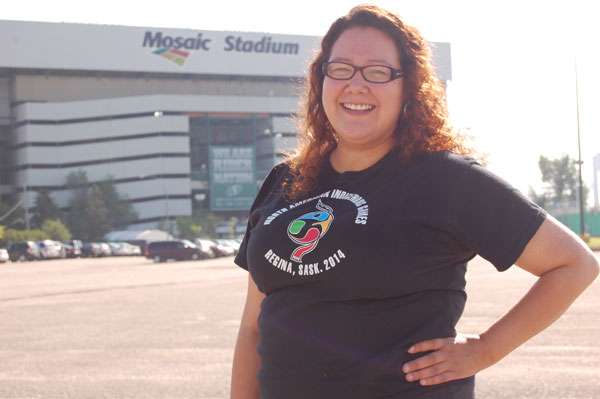 "There's going to be entertainment aside from our oath statement and the lance runners that will be coming in," she says.

"We have a dance troupe: the Thundering Hills dance theatre that will help bring in our athletes. We also have the Saskatchewan Native Theatre Company (SNTC) that will be producing a wonderful story. We will have performances by B.C. pop artist, Inez Jasper, Juno-Award Winner George Leach, Crystal Shawanda, and Plex, a hip-hop artist from Toronto," she adds.

Curtis Peeteetuce, the talent coordinator from SNTC, says he was excited but yet feeling the pressure when SNTC was asked to perform in the opening ceremonies.

"I was feeling a little nervous, scared, overwhelmed and intimidated because this is a big event, even though it's 15 minutes," says Peeteetuce.

SNTC will be doing a short movement piece, according to Peeteetuce. There will be an electronic drum that will display images on the jumbo-tron. The show is written by a talent writer, Kenneth T. Williams, from the George Gordon First Nation reserve.

"We start rehearsal on July 3rd, rehearsing three full weekends from Thursday right to Sunday. We're going to do that three times before NAIG begin," he says.

"We have a team of 30 volunteer performers who we will be rehearsing with us in Regina on the field," he adds.

Desnomie says the closing ceremonies will have a different feel from years prior.

"We really want to keep it upbeat and entertaining. It will happen 8:30 in the evening on the Saturday night. Some of the performers we'll have Sagkeeng's Finest, Joey Stylez and A Tribe Called Red, who will be headlining the show. I'm so excited to see them. I think the kids will love it," she says.

"Were prepared to have the 4,500 athletes coming through. We are hoping to sell out 9,000 seats, the lower grand stand of Mosaic stadium," says Desnomie.

The closing ceremonies will be a free event starting at 8:30 p.m. Saturday, July 26 taking place at the Cultural Village. Both ceremonies can be streamed online as Access Communications will be broadcasting much of NAIG. A full broadcast schedule is available here.