Indian Relay Racing is a sport that has gained so much interest and involvement over the last two years. It’s a new sport that was introduced to Courage Antoine from Poundmaker Cree Nation to not only enjoy racing but to spend time with his family team.

“I like horses. I’ve been riding horses all my life,” said the 10-year-old boy. “My moshum asked if I wanted to race and I said ‘sure.’” 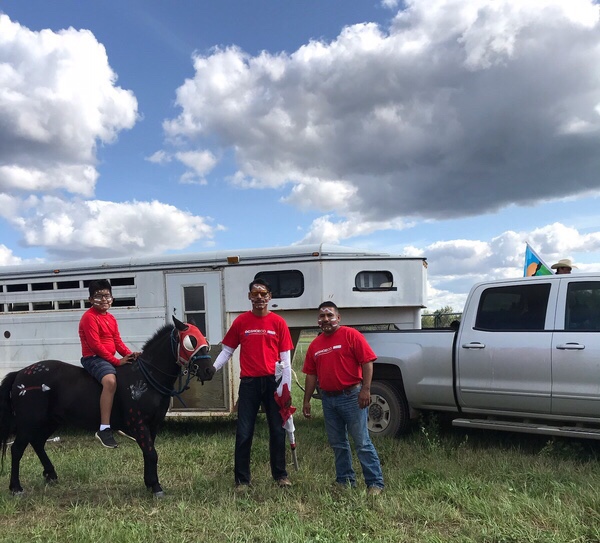 Courage Antoine with his family when he started competing in the Indian Relay Racing. Photo supplied

His Indian relay racing team will start competing this month all summer long. He hopes to win some races, make some friends and to have fun being around his family.

“I am kind of nervous because I haven’t ridden yet since last year,” he said. “My dad would take me to my moshum’s to ride my miniature .”

Father Lyndon Antoine from Poundmaker Cree Nation helps out with his son and his father Vernon when they head out to compete.

“He just started last year with my dad but [the sport] grew on them quite a bit,” he said. “He’s been riding horses since he was three or four years old. We could have gotten him into it sooner so he could have a better outlook on what the sport is. This year, he will do better now that he understands it more.”

Ten-year-old Courage Antoine is excited for a new season of Indian Relay Racing to ride horses, make friends and to spend time with his family. Photo supplied

Antoine’s father Vernon’s interest sparked last year. He was the chuckwagon trial before that so he decided to switch it up to compete in Indian Relay Racing.

“It’s kind of a family thing that we all go together and help each other out. It feels good for us to pass on our knowledge of horses to to get a horsemanship,” said Antoine. “It’s good being around family because it’s basically a family sport that involves us all. It’s an interesting sport. I’ve only started watching it and it’s interesting to watch especially when you watch people you know doing it.”

The Antoine team who have been around the sports of horses their entire lives are excited to start a new season of Indian Relay Racing – a sport that has been gaining national attention for over three years. Photo supplied

The Antoine Indian Relay Racing competed at the Kehewin First Nation in Bonnyville on May 17-19, which is the Canadian Indian Relay Racing Association (CIRRA’s) season opener. Competitions take place all over Alberta, Saskatchewan and even as far as the USA.