Daniel Olver is proud of the way Métis and other Indigenous youth are standing out in the wrestling world. He is current coach of the Huskies at the University of Saskatchewan.

“I wrestled in elementary and high school, was on a bunch of world teams and was a Husky as well, and eventually found my way into the role as a coach, and it’s been quite the journey to say the least,” said Olver. He notes currently there are several Aboriginal kids on the team, Métis, non-status and First Nations. “We have a bigger presence on campus and it’s always good to highlight.”

Hunter Lee is a Métis wrestler on the starting team who is headed to Romania, Michigan, and Italy in May, along with his brother on the junior team. Wrestler Cole Sanderson from Prince Albert will be joining the team, and was on the North American Indigenous Games (NAIG) wrestling team as well; Olver added that quite a few wrestlers have come from NAIG, including wrestlers Kalin Langford and Riley Icton. 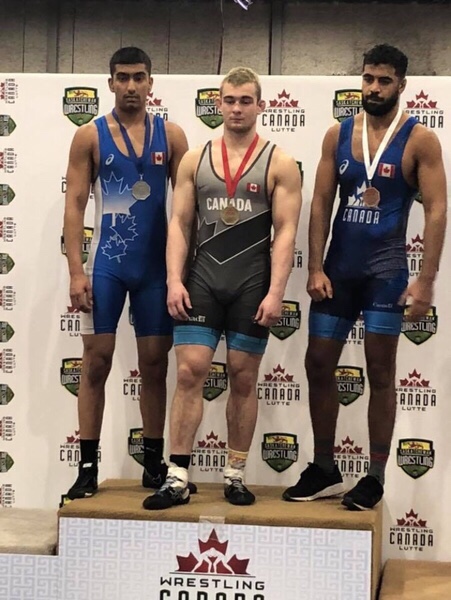 Indigenous wrestlers are making their presence known on the U of S Huskies wrestling team. Photo supplied

“There’s a few other incoming kids that we’re hoping to confirm by the end of the month, probably three or four more who have an Aboriginal background. With wrestling it seems to be that we do quite well with having this NAIG participation and excellence, they win or place second. The coach there has done an excellent job with them and as they continue, they get to the university level and we’ve seen a lot more with the Huskies and it’s been great.”

Olver also notes there is a great Indigenous community on campus via programs like SUNTEP and ITEP, along with the programming and support from the new Aboriginal Student’s Centre.

“They’re giving kids the opportunity to have an education but also to be a great student-athlete and that’s what I’m seeing on my team,” said Olver.

Hunter Lee has been with the Huskies for two years and Team Canada for four.

“I’ve been to both Italy and Romania before, so I’m looking forward to the competitions and to compete and train with different guys than in Canada — Italy is a ranking tournament for seniors and I’m going to get a lot of good matches in there. Last year in Romania I lost to the bronze and gold winners, but this year I hope to do better,” said Lee. His advice for other athletes? “You’ve just got to train hard; it doesn’t matter what your surroundings are. We didn’t have a match or coach, it would just be me and my brother in our backyard practicing, we’d get advice in Saskatoon on technique and go back and have a coach for part of the year in Flin Flon, and we’d just keep progressing that way. You can find a lot of excuses to not do well: but just keep training hard and good things will happen.”

Lee hopes to win a medal in Junior Worlds and make the Olympic team this December.

“In the Olympics I’m in the top four and we’re all pretty close so I hope to win the Olympic Trials in December,” said Lee.