Iron moves from hippos to hockey 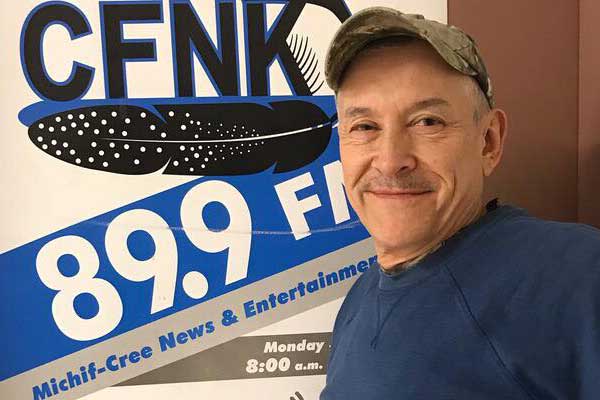 Clarence ‘Chi-boy’ Iron will be doing play-by-play for at least six NHL hockey games per season out of the APTN studios in Winnipeg. Photo by Judith Iron

Clarence ‘Chi-boy’ Iron has always been famous for being the only person in the north who can say hippopotamus in Cree. The Canoe Lake Cree First Nation band member is well-known for his debut as one of the play-by-play commentators in an NHL game between the Carolina Hurricanes and the Montreal Canadiens broadcast on APTN in March of 2019.

In collaboration with Roger’s Sportsnet, APTN introduced the first ever game to be televised in the Plains Cree language. Iron was part of history in the making.

He was recognized as a fluent Cree speaking radio voice in the north. A disc jockey for more than 20 years, Iron is currently employed as a Plains Cree radio announcer for Pinehouse radio station CFNK 89.9 FM. Iron says he looks forward to being on the air every day because he enjoys his work and, even more so, the public he works with.

In the early 1990’s Nap Gardiner of Ile a la Crosse, was the CEO of the Missinipi Broadcasting Corporation (MBC) in La Ronge. Iron worked with at MBC with Gardiner, who gave him his first opportunity to do play by play hockey in Cree and English when he sent Iron to an all-native hockey tournament in Prince Albert. Soon after, Gardiner sent him to Meadow Lake to do another one.

“That’s how it started. I would announce the game in English, but I would throw in a few Cree words every now and then. That opened doors for me to be recognized by other sports agencies and not just hockey. I even went to Vegas once to cover professional boxing,” Iron said.

Iron’s second claim to fame truly began when it was announced through social media that APTN was looking for Cree speakers for the play-by-play announcing of an NHL hockey game. Iron was contacted by a lot of people who saw the Facebook post asking for Cree speakers to apply to this opportunity. He was tagged by many who knew him to be capable of announcing hockey games in fluent Cree because he had been doing it informally for years. Friends and family urged him to look into it. Iron was hesitant until he received a call directly from APTN asking him if he would be interested in applying. He did and he got the job.

“I really have to thank and give credit to Nap Gardiner because without the MBC exposure I don’t think I would have had this chance,” said 58-year-old Iron. “Working with APTN and Roger’s Sportsnet is the opportunity of a lifetime and I am really enjoying this experience.”

Iron is looking forward to 2020 and commentating in at least six NHL hockey games per season out of the APTN studios in Winnipeg. When Iron is not play-by-play commentating in the Cree language for APTN and Sportsnet, he will continue his employment as a radio announcer and disc jockey in Pinehouse on CFNK 89.9 FM.

Iron’s first televised Cree play-by-play game was on January 19, 2020 when the Winnipeg Jets took on the Chicago Blackhawks on APTN.