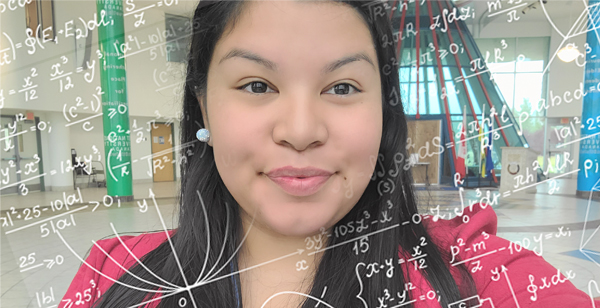 Numbers and complex equations are her speciality, but there is a specific number that has particular importance with Jana Sasakamoose: one.

That’s how many Indigenous women have accomplished what she’s currently setting out to do.

“To my knowledge, Jana is the first Indigenous female in this graduate program. I don’t know of any others who have completed a Masters degree in this area,” said Dr. Arzu Sardarli, Professor of Physics and Mathematics at the First Nations University of Canada (FNUniv).

The naturally gifted Masters student has been drawn to numbers for as long as she can remember. There is something rewarding in the clarity they bring.

“I think there’s something about being able to solve problems, and knowing there’s more than one way to solve it. Then, once you’ve solved it, you can do it from forwards to backwards, to make sure you’ve done everything right,” said Sasakamoose.

Sasakamoose’s trailblazing academic career has been anything but a straightforward equation.

From Ahtahkakoop Cree Nation, and raised in Prince Albert, Sasakamoose said from an early age she was aware of the intergenerational trauma around her as a result of Residential School and Day Schools. As she grew up, she experienced mental, physical and emotional abuse in relationships with partners, forcing her to move around to escape the abuse.

Knowing she had a gift for numbers throughout elementary and high school, Sasakamoose believed her best and only option to apply her talents would be to pursue a degree in business administration at Saskatchewan Polytechnic (then SIAST). But even completing her business administration degree came with its share of complications.

“I was having a kid each year of my degree. Sometimes I would breast feed during exams. Or (be) going back to school three days after giving birth,” she said.

Presently, Sasakamoose is the mother of five children. Step-son Kaze, 8; Rocky, 7; Tony, 5; Gracie, 3; June, 2. And, she is currently pregnant with her sixth child.

“After the first two years of school, and after two boys, I took a year off school. I picked berries that summer. I had no other income. I would pick enough that day to go to town and sell them, then do it all over the next day,” said Sasakamoose.

“Picking during the hardest time in my life was what I needed at that time. And it was really healing. It made me reflect on my life and where I see my people going, and how I can change that. How you can help your kids walk a different path.”

Saskamoose’s partner, and the father of her children, was an addict and involved in gangs at the time (he’s now sober and in his second year of University at FNUniv). She describes their relationship as very toxic. But she knew she had to do everything she could to provide a better life for their kids.

Returning to finish her degree, Sasakamoose caught the attention of Dr. Arzu Sardarli during the mathematics, calculus, and statistics classes of his she attended.

“She was the best in all of my classes, always at the very top of her class. I realized she had a real talent in mathematics,” he said.

Sardarli, who has been teaching since 1985, said Jana’s talent in mathematics is only found in about one or two percent of the population. Upon Sasakamoose finishing her degree, he encouraged her to pursue mathematics in her Masters degree, an option she hadn’t considered possible.

With some guidance from Sardarli, she applied and was accepted to do her Masters at FNUniv. She is now teaching and tutoring math, raising her kids, and working towards her Masters, which she’ll complete next spring.

She is also working on a research project with Sardarli where she is looking at utility expenses on her home First Nation, Ahtahkakoop. As someone who is very invested in her culture and heritage, finding a cross-section between her passion in mathematics and her Indigenous identity is exactly what she aspires to do in her career.

“I want to be able to take this kind of work further so I can create energy management projects that will be beneficial for communities. With numbers, you can project and have an estimation of what’s going to work and what won’t, and create a picture of how communities can be better shaped for the future,” she said.

Sardarli calls Sasakamoose a “very inspiring young lady” and hopes her story of perseverance can encourage other young Indigenous people not to give up on their dreams.

Saskamoose herself said it’s very humbling to be thought of as the first Indigenous woman to do what she’s doing academically.

“I’m very excited because I’m doing something I love and opening doors for my career. And I can talk to other students. A lot of them know my story and know nothing was handed to me,” she said. “You have to work hard, but you can do what you love.”