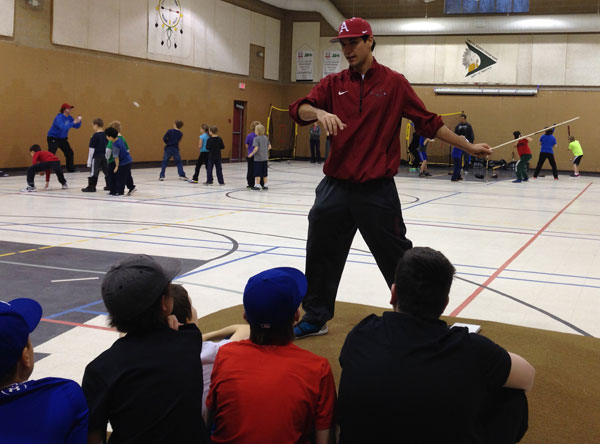 As a 2016 Indspire Award winner, Christian Kowalchuk takes his responsibility as a role model seriously, giving of his vacation time over the holidays to share his skills and a few thoughts with youth in La Ronge.

“This isn’t about me,” he told the students at the Lac La Ronge Indian Band’s Bell’s Point Elementary School on January 4, 2016, “this is about you guys.”

“School is the most important thing,” he emphasized.

A member of the Bigstone Cree Nation in Alberta, Kowalchuk grew up in Saskatoon. A full athletic scholarship allowed him to play college baseball in the United States. He not only excelled in the sport, but in his studies as well, earning a Bachelor of Arts in Economics and a Masters of Physical Education from the University of Arkansas.

“Baseball is a team sport,” noted Kowalchuk. “It requires you to work together as a team, kind of like what you would do in a class project. When you work together as a group, you end up being successful based on each individual person doing their part. Be a team player. Don’t let your team down,” he advised the students.

Borthwick, the founder and president of La Ronge and Area Minor Baseball, had the pleasure of coaching Kowalchuk in his early teens, and was happy to have him come to La Ronge to share his professional expertise.

Ten-year-old Garrisen Clarke plays shortstop. What did he think of playing baseball in the winter?

His mother, Loni McCuaig, was grateful her son had the opportunity to participate in the camp.

“It enhances their skills,” she said.

The camp focused on the fundamentals of throwing and receiving, hitting, pitching and fielding.

“Quality instruction is key. I learned some new drills and new ideas myself,” admits Borthwick, who has previously coached at the provincial level.

La Ronge and Area Minor Baseball has been active since 2006. Last year, over 200 players were involved in the recreational league which typically ends once school is out. The Pee Wee team, however, played competitively during the summer and advanced to the provincial semi-finals, despite having their playing schedule disrupted because of the evacuation due to the forest fire situation.

Though Kowalchuk has run youth skills camps in Arkansas, this was his first camp in Saskatchewan and the first time he has spoken to school classes here, and it is something he hopes to do again.

“If you find something you’re passionate about, whether it’s baseball, music, whatever it is, you’ve got to put in some hard work,” he told the students.