The sport of lacrosse is alive and well on the Mistawasis First Nation.

Four youth band members were part of a Peewee team that won a gold medal at the recent provincial lacrosse tournament in Saskatoon.

Bryley Bowman, 11, Damien Head, 12, Ivan Ochuschayoo, 12, and Lionel Johnstone, 12, were all key parts of a Prince Albert Predators team that went undefeated at the tournament.

Bowman, Johnstone and Ochuschayoo all played on a forward line together while Head tended goal.

Lester Ledoux is the recreation coordinator for the Mistawasis First Nation.

He says Mistawasis kids began playing organized lacrosse about nine years ago and interest in the sport has grown steadily since.

“It was introduced to our community by a couple of kids from Saskatoon,” Ledoux says. “So we started off with I think eight boys and one girl in the PA Minor Box League and that worked out well. I think that year we won the city championship just through hard work and determination.”

To achieve gold, the Predators defeated the Saskatoon Swat 7-4 in the final game of the provincial tournament.

For his efforts, Ivan Ochuschayoo was awarded tournament MVP.

He says the Predators faced their stiffest competition from the Swat team and it was nice to pull out a convincing win.

Ochuschayoo has been playing lacrosse for a little over two years and also participates in basketball. 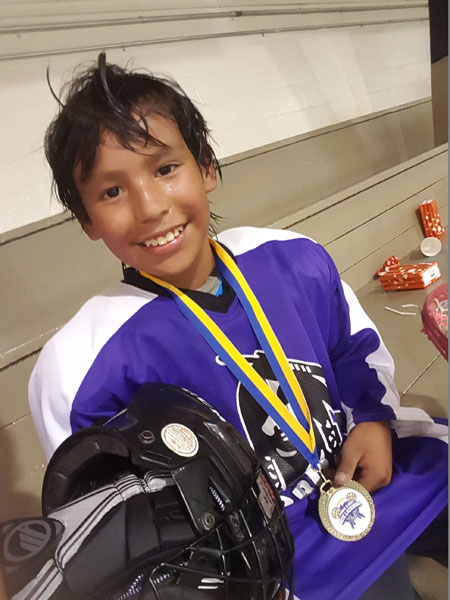 The 12-year-old says it was also a big thrill to see the newly formed Saskatchewan Rush professional lacrosse team in action this past winter.

“It was really exciting to see just how good they are,” he says.

Lionel Johnstone was also named a first team all-star at the provincial tournament.