Olympic athlete Jesse Owens once said, “In order to make dreams come into reality, it takes an awful lot of determination, dedication, self-discipline, and effort.” and 21 youth have done this in order to participate in the 2019 lance run. 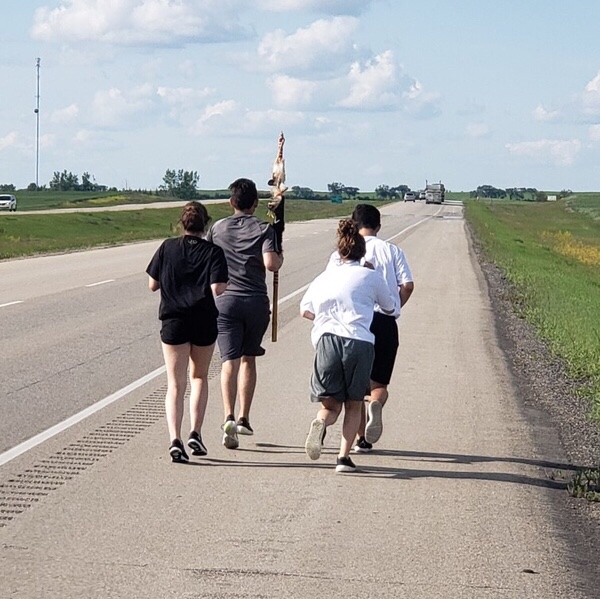 Participants in this year’s Lance Run run from Chamberlain to Kenaston on July ninth as part of the annual run which opens the Saskatchewan First Nations Summer Games. Photo courtesy B. Merasty

The lance run is a sacred and spiritual event which starts that years Saskatchewan First Nation Summer Games. Various youth are chosen to run the warriors lance from where games where the previous year to where games will be that year.

Sawyer Kree Norman just finished eighth grade at Jonas Samson Junior High School on Flying Dust First Nation and is one of this year’s participants in the run.

She also wanted to participate as this is a big opportunity for the community.

“It’s a very sacred thing and it’s a really big opportunity to come and be a part of this. So, I was honored to know we are hosting the summer games and knowing that we could take it home from Regina.” said Kree Norman.

Jeanelle Neufeld, the community wellness worker in the health department on Flying Dust First Nation, first heard about this from an elder in the community who was on the planning committee.

Neufeld thought she would have a small role in the organizing and got involved to learn more about the run, as she had never heard about it before and ended up being one of the main organizers.

“This journey is really moving for these kids. They get to learn about their culture and get to experience it first-hand.” said Neufeld.

This year's runners were chosen on very specific requirements. The youth must be good role models, clean from drugs and alcohol, attended school regularly, and be respectful because they were representing their community.

To get their body ready for the excessive running, Kree Norman and her classmates practiced on the local track, walking paths, or would run the hills from 4:30 to 6:30 Monday to Friday.

This year's lance run began with a ceremony at the First Nations University of Canada on July 8 in Regina. The runners will then go through and stop Chamberlain, Kenaston, Saskatoon, Maymont, Cochin, and get to Meadow Lake on July 13. The Tony Cote Summer Games will then welcome the runners at the opening ceremonies on July 14.

All together the youth ran 565 kilometers in 10 days. They ran from eight A.M. to five P.M. every day staying between 80 to 90 kilometers a day.

As it is a warrior’s lance, the boys participating carried it and then the girls run beside for support and to watch nothing got in their way.

“Flying Dust is very proud to be hosting the summer games and the lance is what brings in the games,” said Newfeld. “If there's no lance run, there's no summer games. So, I think this is a very important piece and our community finds it important that we are doing this the proper way.”