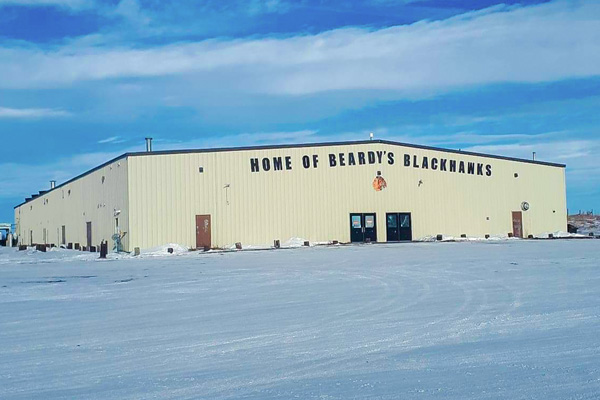 The Beardy’s Blackhawks AA & AAA Midget Hockey team franchise were pulled out of the game starting next season as decided by the Saskatchewan Hockey Association. Photo courtesy: Tyrone Smallchild

However, the Saskatchewan Hockey Association (SHA) announced on November 12th that starting next season, the Beardy’s Blackhawk’s Midget AA and AAA hockey teams will no longer be playing. The news has sent shockwaves throughout the province, including close to home at the Cameron-Gamble residence.

“I was very saddened, upset and asking ‘why?’, twenty-five years of having both elite hockey teams in our community and just like that, it’s been taken away from us,” she stated. “I was angry because of all the memories, friendships, and talent that came through our arena, and for my son and his teammates to play with the elite once they got to that level. But now it’s been taken away from them.”

Cameron-Gamble’s second youngest son, who is 10-years-old, was just as upset as he questioned his parents about the future of hockey in their community. It’s something that Cameron-Gamble could not answer as the SHA’s decision left many to wonder ‘what is next?’

“Maybe they should provide answers to our future players who once looked forward to play at that elite level in their home community…my two youngest [won’t] even get a chance,” she said. “Give us back our teams!”

In a prepared statement by the Blackhawks Minor Hockey Association (BMHA), president Jason Seesequasis stated that the member clubs are profoundly saddened with the recent announcement.

“Our AAA Blackhawks are the only AAA midget team in all of Canada to be located on, and operated by, a First Nation. The only one,” he stated. “In this era of reconciliation, this team should be a point of pride, and a flagship franchise for a sport’s governing body like the SHA. Instead, they take a one-of-a-kind team, and with the stroke of a pen, they kill it. This is 2019. How does such a decision make any sense?”

Tyrone Smallchild, the BOCN Councillor in Charge of Sports and Recreation, added that kids in the community had looked up to the AAA and AA teams.

“The goal for them [is to make it] into either Jr., university or pro,” he said. “Currently, we have band member Dailyn Smallchild [who is] an alumnus from the Beardy’s AAA team who is playing in Germany and numerous others who play Jr. hockey.”

The spokesperson for BMHA, Rick Gamble stated they had heard rumors all through the summer that SHA’s decision was already made and that the application process was a mere sham to give procedural cover for taking back the Beardy’s teams.

“We were told that SHA personnel, in private conversations long before the applications were due for submission, acknowledge that Beardy’s was on the chopping block,” he stated in a media release. “We chose to enter the process in good faith, but, as SHA gave no weight whatsoever to what these teams mean to Indigenous youth in Saskatchewan, we can’t help but think that perhaps these rumors were true all along. People are sad and angry. However, this is not the end of the story.”

BMHA will take the time needed to consult with its member clubs, legal counsel and other stakeholders to determine what their next step will be.