Mike and his pals own North America in 3x3 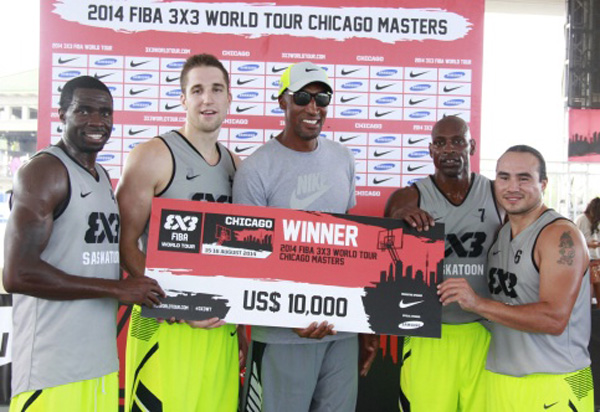 Mike Linklater has gone from playing basketball in the inner city to winning a national CIS title and now a high level North American 3 on 3 tournament. Team Saskatoon edged out Denver in a thrilling 18-17 win in Saturdayís final of the FIBA 3x3 World Tour Chicago Masters which was also part of Nikeís World Basketball Festival.

Willie Murdaugh had 7 and O'Neil Gordon scored 6 points in the final, including the game-winning acrobatic lay-up with 15 seconds to go in the game to put Saskatoon on top. They were on the four man team with former University of Saskatchewan stars Michael Liefers and Mike Linklater. Linklater is ranked as the top 3x3 player in Canada by the International Basketball Federationís (FIBA) 3x3 Basketball trackers.  Last year his team finished second in the Americas and sixth in the world.

3x3 is a fast game that runs ten minutes with only a 12 second shot clock. "We prepared different than for a regular game," said Linklater. "We used Ignite Athletic Conditioning and they geared our workouts so that we worked hardest at the end. These short games are won and lost in the final two minutes."

Team Saskatoon took home the $10,000 USD winning cheque, which was handed out by 1992 Olympics gold medal-winner and basketball legend Scottie Pippen, while Denver won 5,000 USD. Both qualified for the FIBA 3x3 World Tour Final, which will take place in Tokyo, Japan on 11-12 October.

"Scottie Pippenís hands are ginormous," added Linklater who was thrilled to meet several NBA stars at the event where he also acted as an ambassador and gave a speech at the opening ceremonies. "That was a pretty humbling experience, especially when I left the stage and the American National team filed by...all these NBA stars. It was great."