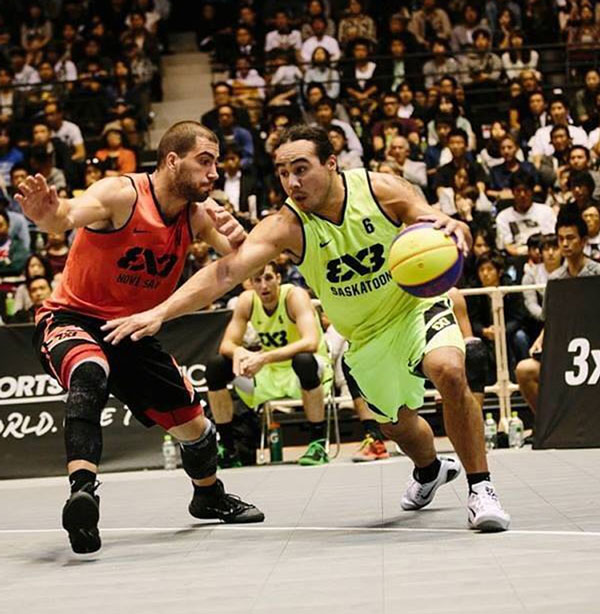 Michael Linklater has retired after an amazingly successful basketball career. Now this role model is onto community service as a Thunderchild First Nation Councillor and he is participating in several campaigns including bringing a wold class outdoor basketball court to inner city Saskatoon. Photo supplied

Over the past decade, Michael Linklater’s name has become virtually synonymous with athletic excellence in Saskatchewan. Linklater’s Saskatoon 3x3 basketball team was ranked among the top in the world for several years, he won a CEBL championship in the inaugural season with the Saskatchewan Rattlers, and has hosted countless camps and speaking appointments to help motivate young people in athletics, culture, and life.

As of this August, Linklater has retired from basketball. But his role as a community torchbearer isn’t going anywhere.

“It was time for a change. My body feels great, and I love playing the game, but the time that it requires in order to stay competitive is not something I want to sacrifice right now,” Linklater told Eagle Feather News.

“There are a lot of other things I want to give my time to, one being my family. As well as some initiatives that require very passionate people.”

Linklater is wasting no time transitioning from the court to the community. He was recently elected as a Councillor at his home Thunderchild First Nation, which he will serve for a four-year term.

“I am really liking the leadership role and being able to sit at these decision-making tables that are making a greater impact on a larger scale,” he said.

Linklater was also recently approached by the Saskatoon Public Schools Foundation to sit as co-chair for a fundraising initiative that will be raising dollars for a literacy program for inner city youth.

In late September Linklater was also elected for a three-year term to the AthletesCAN national board, which is an athletes-run organization which provides a voice for Canadian national team athletes, and who develop leaders to influence sport policy and culture.

“As Indigenous people, our ancestors had their identity stripped from them and to this day we are still clawing and fighting to get our way of life back,” he said. “So, it’s extremely important for us to make sure we are connected with our communities and culture. It’s our inherent right to be proud of our spiritual identity and culture.”

But Linklater still has some basketball left in him. His athletic career has taken him all over the world, but had humble beginnings on a simple outdoor court in Saskatoon. As such, Linklater is one of three leaders behind the “Hoist the Hoops” initiative, which hopes to bring a marquee outdoor basketball court to the Riversdale/Pleasant Hill area of Saskatoon.

This relentless pursuit to better his community comes from a responsibility he feels to constructively use the stature he gained from sport.

“I think I’m someone that a lot of people over the years have looked towards,” said Linklater. “I take that very seriously knowing that there’s younger generations looking up to me. I want to make sure I’m leading by example.”