The Cumberland House Islanders and the Creighton Kodiaks are the champions of the 2016 Northern Saskatchewan Football league. The finals were held at the Max Clunie Field in Prince Albert with the 1A game seeing the Cumberland House Islanders playing the Green Lake Spirits for The Ralph Pilz Trophy. Braedy Sinclair, the Green Lake team leader was unable to play due to a shoulder injury sustained earlier in the season. Green Lake had a quick start with Jaydee Laliberte scoring two touchdowns for a 12-0 lead. Later, Laliberte sustained an injury that put him out of the game and the tide turned in the Islanders’ favour as Bailey Carriere scored three touchdowns followed by two each from Brandon Fiddler and Glenn Thomas as the Islanders defeated the Spirits by a score of 52-37. 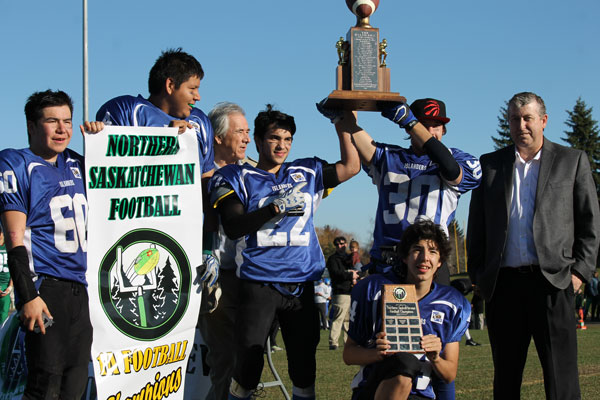 Later in the afternoon, the Creighton Kodiaks took on the La Ronge Lakers in the 2A championship. It was a defensive game with the only scoring in the first half being a field goal by Kodiaks Dean Rainville. It wasn’t until 2:42 left in regulation time that Chris Reynolds scored a touchdown and gave the Creighton team a 9-0 win over La Ronge.

Going into the first week of provincials the Green Lake Spirits have decided to forfeit their game against Hague as a result of injuries and being unable to field enough players. The Spirits are the smallest football school in Saskatchewan.

Three other games are scheduled for Saturday, October 24. All northern teams will be playing SHSAA Conference Four teams in either 2a or 1A. La Ronge will be travelling to Rosthern, while the Creighton Kodiaks will be hosting Birch Hills. In 1A action, Cumberland House will be hosting Carrot River.