Opening week for Northern Saskatchewan Football (6-aside) saw four exciting games played across the province. To kick off the season on September 10th, the Ahtahkakoop Titans hosted the Beauval Voyageurs. In their very first game in the northern league game, both Skylar Nayneecasum and Matthew Arcand of the Titans excited the hometown fans with two touchdowns each to lead Ahtahkakoop over Beauval by a score of 32-12. 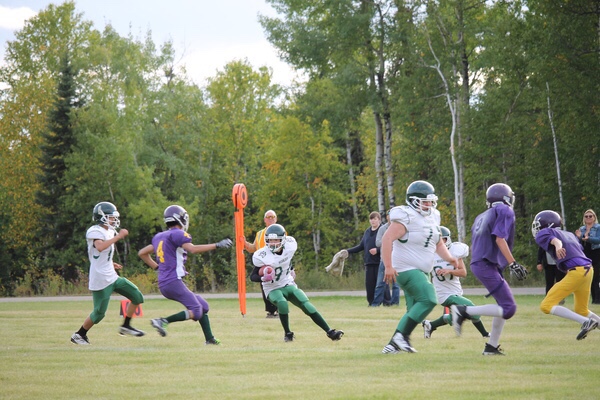 On September 11, a double header of games was played. For the first time ever, the Creighton Kodiaks travelled to the community of Pinehouse to take on the Lakers. The offense of the Kodiaks overpowered the Lakers with three touchdowns by Austin McLean and a pair each from Aiden Collard and Evan Madarash. The final score was Creighton 67-12 over Pinehouse. Later in the day, the Sandy Bay T-Wolves, after a delay caused by a flat tire enroute to Cumberland House, took on the defending champion Islanders. The Islanders did not disappoint their fans scoring three touchdowns, one each by Bowen Stewart, Jesse McKay and Percy McKenzie to lead Cumberland House over Sandy Bay 32-12.

On September 12, the La Loche Lakers travelled to the Lac La Ronge Indian Band to take on the Senator Myles Venne Huskies. This was a close match throughout the game. Gino Clarke led the La Loche squad with three touchdowns and this was matched by Senator’s Jonah McKenzie. Going down to the final whistle, the La Loche Lakers won their first game ever by a score of 38-32.

In 9 aside action, the Tisdale Tornadoes travelled to La Ronge to take on the Churchill Chargers. The Chargers have a young season but fought hard, with a major scored by Owen Bird. Tisdale defeated La Ronge by a score of 40-8.

Looking ahead into the second full week of action, Beauval travels to La Loche on Tuesday. Wednesday’s double header will see Ahtahkakoop trying to remain undefeated hosting SMVS and Creighton wanting to go 2-0 when they host Sandy Bay. On Thursday, Cumberland House travels to Pinehouse. Friday’s 9 aside game will see Melfort travel to la Ronge. Come on out to see some great Northern Saskatchewan Football.