Northern Saskatchewan Football had an exciting first week of action. 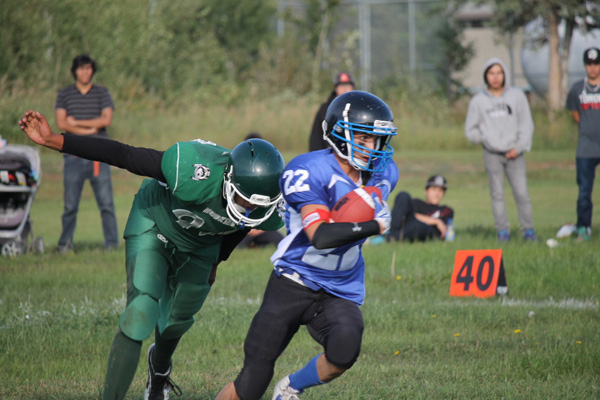 On Thursday, September 3, 2015, two games were held to start the season in Cumberland House and Creighton. In Cumberland House, #22 Brandon Fiddler played his first game after sitting out the entire season in 2014 with a broken arm. He certainly impressed the home town crowd by scoring four touchdowns and recording three interceptions. Brandon was the scoring leader in the inaugural 2013 season and will serve to make the Islanders of Cumberland House a formidable team as they defeated the visiting Senator Myles Venne Team (SMVS) by a score of 78-12.  Over in Creighton, the defending champion Creighton Kodiaks had a balanced offensive attack and a strong defensive game to defeat the Sandy Bay T-Wolves by a score of 53-8. Leading the Kodiaks were Tyler Williamson and Blaire Pietsch with two touchdowns each, and Dean Rainville added a touchdown and five kicking converts. 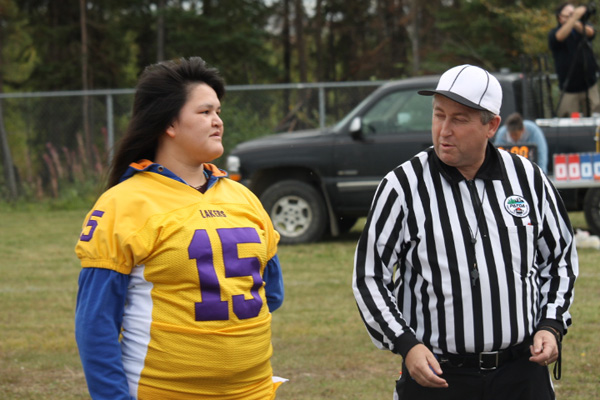 On Friday, September 4, 2015, the second annual Laker Bowl was held in La Loche. A pregame highlight was the coin toss which was conducted by Diana Janvier, a former La Loche Laker who lost her leg last season, in an accident involving the team bus after the Laker bowl in Pinehouse. Second year player, Dray Tinker wore the #27 of his older brother Johnny Tinker and led the visiting Pinehouse Lakers with five touchdowns in 64-18 victory over the La Loche Lakers.

The one other game that was scheduled last week was forfeited by Buffalo Narrows Eagles, who were unable to complete practice time with enough players. Buffalo Narrows has a bye this week and will begin play in week #3. The Green Lake Spirits were the winning team by default.

At the end of the first week, Pinehouse Lakers, Creighton Kodiaks, Cumberland House Islanders and Green Lake Spirits are all first place in their respective divisions.

Looking ahead at week two of Northern Saskatchewan Football action, Beauval Voyageurs will begin their season in Pinehouse on Tuesday. On Wednesday, Green Lake Spirits will travel to La Loche to take on the Lakers. On Thursday, two games will be held in the La Ronge area. The first game will be held at the Lac la Ronge Indian Band, with the host Senator Myles Venne Huskies taking on the Creighton Kodiaks. After that game and across town to La Ronge, the Chargers will host Cumberland House.

Stay tuned for more results in the coming weeks!