Okanese youth part of surging growth for love of hockey

Playing hockey was a great way for this young athlete to get out of the house and learn something new.

Thirteen-year-old Elizabeth McNabb is from the Okanese First Nation and has been playing hockey PeeWee for the Okanese Thunderstrikers for over five years and plays defense and right-wing. 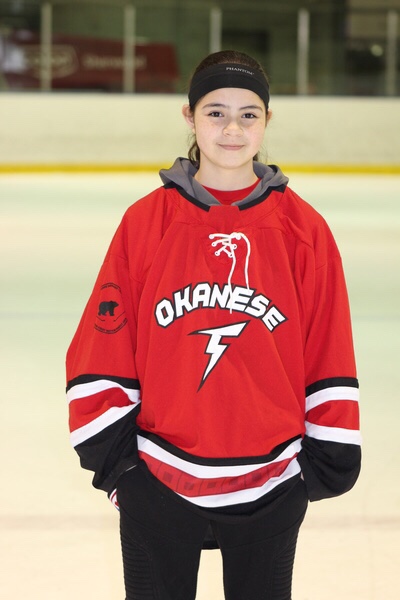 Elizabeth McNabb who loves playing the sport of hockey competed in this year’s Oskana Cup tournament. Photo by Jeanelle Mandes

McNabb’s step-dad taught her how to skate and introduced the sport to her.

“It’s to get out of the house and do something for once,” said McNabb, whose favourite hockey player is Evgeni Malkin who plays for the Pittsburgh Penguins. “It’s a cool sport and it’s rough. I like playing rough.”

Although her team didn’t win the Oskana Cup Aboriginal Hockey Championship this year, it was all about gaining a memorable experience and for the love of the game.

“It’s okay to lose but just try to win and have fun,” she said.

Seventy-two teams travelled from near and far to compete in this year’s 14th Annual Oskana Cup Aboriginal Hockey Championships held at Regina’s Co-operators Centre. Every year, the tournament tends to grow interest and participation.

“When we first started the tournament, there was very little youth involvement in tournaments of our Aboriginal people,” she said. “[This tournament] is all about the youth. They can meet kids from all over the place…the whole reason why we started this was to give an opportunity to the Bantam players so they have an opportunity to be scouted. We’ve already reached that goal. We do have scouts…they hide out [at the games]. Those opportunities definitely happen. The tournament has been growing and more competitive every year that it attracts the scouts.”

Lavallee said to host this annual event, it costs over $100,000 and the ice alone is $52,000. The Oskana Cup Aboriginal Youth Hockey Championships took place from May 3rd to 5th.