When Fred Sasakamoose found out he was becoming a member of the Order of Canada, he nearly hung up his phone on the woman on the other end of the line.

At first, Sasakamoose thought the woman was trying to sell him something. Her attempts to explain the Order of Canada, an honour in “white society” that Sasakamoose was unfamiliar with, were made more confusing when she started speaking French. After a few more phone calls, Sasakamoose says he came to understand that the Order of Canada is one of the highest honours in the country, which symbolizes “what it takes to give a portion of your life to your communities.”

Sasakamoose is known in Saskatchewan for promoting sports to Indigenous kids, and is best-known across Canada for being the first Aboriginal NHL player. Nearly 63 years ago Sasakamoose played the first of his 11 games with the Chicago Blackhawks over two seasons. He knows his NHL career was brief before returning home to Ahtahkakoop Cree Nation, but his memories of that time are strong. He recalls that his self-described “red skin” didn’t make any difference on the ice.

“That's where it started my life, not to think of yourself highly but to be able to participate, to (know) that you could play the same level of hockey (as others).” 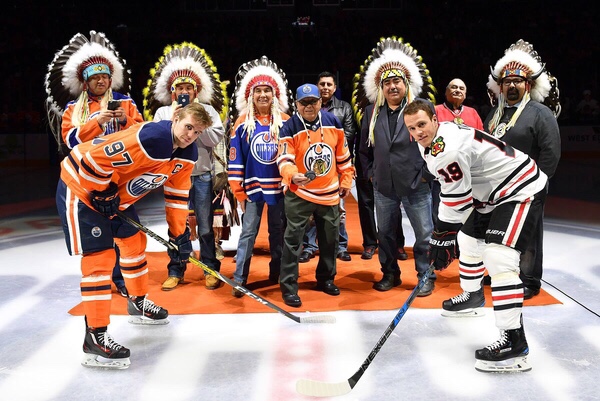 Sasakamoose says as a St. Michael’s Indian Residential School student, he was given a second-level education. Sports, though, were a great equalizer and he says through hockey “I gained the closest relationship with all sports people, with people itself.”

Sheldon Wuttunee of Red Pheasant Cree Nation remembers Sasakamoose looking on as he learned to skate as a young boy at Sandy Lake. At the end of December, Wuttunee was among those to join Sasakamoose at Edmonton Oilers centre ice at a game against the Blackhawks. Sasakamoose dropped the puck for the game after a special ceremony where it was announced that he is one of the 86 people across the country to become a member of the Order of Canada.

Wuttunee, who is now president and CEO of Saskatchewan First Nations Natural Resource Centre of Excellence, says Sasakamoose was a role model to him as he played hockey growing up.

“Even though I didn’t make the NHL I still gained some great opportunities through the game of hockey and now I guess the onus is on me to help give back and support as well,” he says, because “that’s what our young people need nowadays too to become successful.”

Sasakamoose recently asked higher-ups at the Oilers to donate 30 tickets for Ahtahkakoop youth to attend an Oilers and Colorado Avalanche game in early February. The kids will do a morning skate while in the city, watch practice, and meet players like Connor McDavid, Sasakamoose says. He says at first, he was told his request was too great, but he insisted.

“A lot of times I feel like I’m a pain in the ass to a lot of people but it’s what it gives me to do,” he says.

At 84, Sasakamoose’s schedule is full. He travels all over Canada to speak to kids, including an upcoming trip to Moose Factory, ON to speak about the power of sports, and grants all interview requests that come his way. He takes pains to represent his people with strength and to watch his language, but he does not want to hide his past mistakes.

“I think the role model of your life, sometimes a lot of people think you’re an angel, but you’re not,” he says.

He is so outspoken now, he says, because it’s his duty to let “our young people in the future, (know) they could do better than me... to have that somebody and say ‘Well you know, I want to be like Freddie. Well, Freddie was not the best, but he was the first, but also, I could do better.’”

Even for himself, Sasakamoose had wanted to get to the Olympics to play hockey. While that wasn’t in the cards for him, he says he hopes by pushing for people to give opportunities to young Indigenous people that he will make a change for the better.