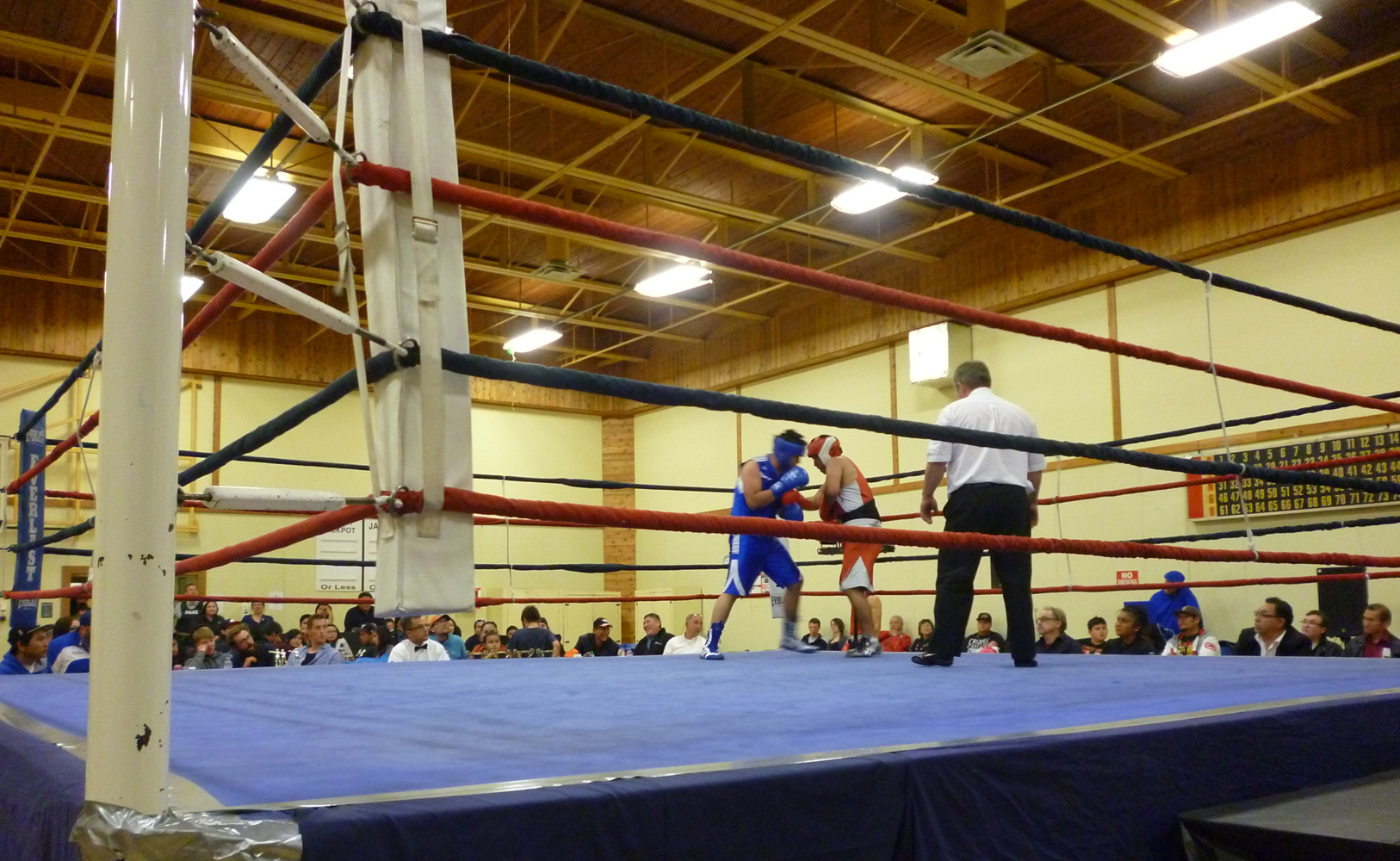 After an inspiring prayer in the ring by Mona Deiter, and a delicious turkey dinner with all the fixings prepared by Esther Cyr, about 200 people took in the Pasqua First Nation promoted “Rumble in the Valley”. The sanctioned boxing card held in the White Calf Gymnasium in Lebret featured 14 boxing matches.

To start the boxing show, spectators were treated to a Grand Entry led by pow-wow dancers followed by boxers and coaches with drumming supplied by the Pasqua First Nation Youth Drum Group. Medical volunteers Dr. Randy Radford and LPN Tammy Cyr sat ring side as Chief Todd Peigan and Chief Michael Star brought greetings as the action was ready to begin.

Pasqua boxers Logan Goodwill and Thomas Gordon were working the gloving table as officials for the evening, disappointed their opponents from Manitoba and USA had to cancel at the last minute. All the Pasqua boxers train three times a week at the school on the reserve under the supervision of Erick Gordon director of the boxing program and Wesley Sunshine the head coach. Wesley Sunshine is a former Sr. National Boxing Champion and boxed all over the world as a member of the Canadian National boxing Team.

Check out our photo gallery of Rumble in the Valley.

Chris McDougall in the 91 KG division was the first Pasqua Boxing Team member to compete. Chris was 2 and 0 entering the match both knockout victories. The hard work in the gym paid off as Chris won a unanimous decision using his inside body work and combinations over Issaih Severight from the Newline Boxing club in Regina.

The main event of the night in the 57 KG division featured Pasqua Boxer Ocean Desnomie, whose boxing record sits at 6 wins and 2 defeats, he was challenged by Haydor Ali Cappo an experienced boxer who fights out of the Jaguar boxing club in Regina. After an even first round boxing, coach Wesley Sunshine convinced Desnomie to “walk his opponent down and double his left hand and throw the right with more power”. Desnomie listened to the advice and came out in the 2nd round on fire taking over the fight with his superior boxing skills. The boxing match was stopped in the 3rd round with a TKO victory for Desonmie.

Lester Mendoza from Elite Boxing out of Winnipeg was awarded the Ken Goff trophy as Top Boxer of the Tournament with a TKO victory over Tarin Carr of the Regina Jaguar boxing club. The Fight of the Night Morris Pettit Trophy was awarded to Will Skopyk of the Prince Albert Boxing Club with a split decision victory over Carson Bergen of the Sandhills Boxing club Leader Saskatchewan.

Rumble in the Valley  ( Results )