Keep your head up and stick on the ice.

This is a piece of advice many hockey players have heard at least once in their career and 10 pee wee players did just that winning gold at a five-day tournament in Las Vegas, Nevada, this past May. 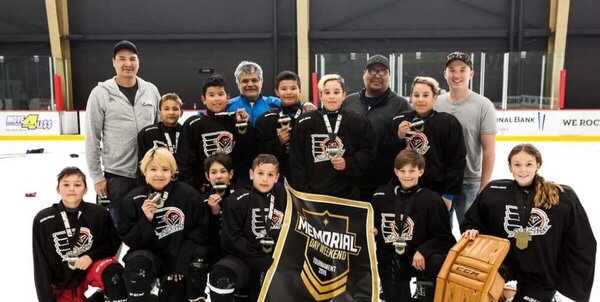 The Whitefish Flyer pee wee hockey team from Big River First Nation took gold in a tournament in Las Vegas, Nevada at the end of May 2019. Photo by Misty Krayetski

The Whitefish Flyer hockey team from Big River First Nation formed last year and up until this point they had only played in more localized tournaments.

Carrie Whitefish, team manager, saw a post about the tournament on Facebook and entered the team, as she wanted the players to have an opportunity to play in the United States.

Her son, Keedon Whitefish, who has been playing hockey for seven years now as a centre, defense, and left wing, was one of the players in the tournament.

Keedon was exited to play in the tournament and showcase his abilities as an athlete.

“We were winning nine to six and right when the buzzer went, I was really happy and threw my gloves and helmet and stick up,” said Keedon about the tournament win.

Mark Krayetski, who is the head coach, and has a daughter on the team, thought this would be a good tournament for the kids to participate in not only because it gave them the opportunity to travel and play new teams, but because they could start playing with the new pee wee rules which are trickling in from the United States.

Krayetski was not surprised when the buzzer went off declaring them the winners of the tournament. They had already won every game they played and had beat the other team beforehand.

“It was just a matter of doing what made them successful all weekend which was moving the puck, keep skating and let their skill come through,” he said.

Krayetski was happy the season ended on such a high note for the players.

“It wasn’t an Aboriginal tournament so to be on an Aboriginal team that’s traveled that far, and everybody has put in that kind of commitment, was a really good way to end our year. I was really proud they went down there and stuck to the game plan and let their skill come through and stay the course through some of the games they were nervous about,” he said.