Placing her hopes on hockey 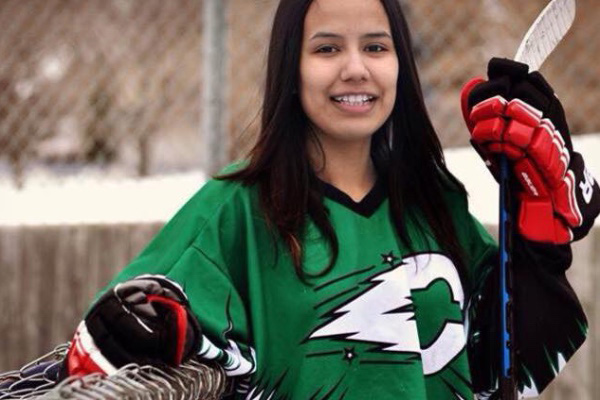 From ringette to hockey, we meet up with a girl who comes from a big hockey family. She is using the sport to her advantage, and she hopes it will take her goals to another level.

Seventeen-year-old Teagon Marion is from James Smith Cree Nation. She has been playing ringette for most of her earlier years before switching to hockey.

“I switched from ringette to hockey because I felt that if I played hockey instead, there will be a chance I could play at the elite level, like attending the Hockey Training Institute,” said Marion.

Last time she was interviewed with Eagle Feather News, she was 14-years-old and was training for the 2015 winter games.

“I am not training for the 2015 Canada Winter Games anymore as the event has passed in the spring. I had made Top 50, then was cut,” said Marion.

She plans to attend a Hockey Training Institute (HTI) in Ontario. This will be the start of her elite hockey career with HTI. Her goal is not just about playing hockey, it’s about her future.

“I played at the National Aboriginal Hockey Championships in Montreal in 2014 with Team Saskatchewan and that is how I heard about HTI,” said Marion.

Marion had plans to attend university for kinesiology but had changed her mind after an exciting experience.

“I changed my major from kinesiology to nursing because I attended a career day in my health science class this previous semester that consisted of nursing and I so happened to really enjoy it. I feel that I see myself working in a hospital,” said Marion.

HTI has offered her a spot on the team already, and the private hockey school allows players to study online and do their school work at their own pace through the virtual high school.

She is not worried as she enters grade 12 this fall and the HTI: she will only need 6 credits to graduate.

The program starts on September 1, so Marion has a month to get ready. Feldman says that they have had some really good experience in getting players from the NAHC join their program and be very successful.

“A few of them have moved on to play collegiate hockey and have had successful careers,” said Feldman.

Marion hopes that attending the HTI will give her the opportunity to commit to a Nations Collegiate Athletic Association (NCAA) or Canadian Inter-university Sport (CIS) team as HTI gives their players a lot of exposure from coaches.

“If the GoFund me page doesn't raise enough money, my family and I will have to fundraise a lot more. We are currently looking into having a steak night & some bingos to help with the cost,” said Marion.

With a big family of eight and her being the oldest of six children, she has three brothers who are still playing hockey, each in their own division, so hockey becomes quite expensive but it has its rewards in the end.