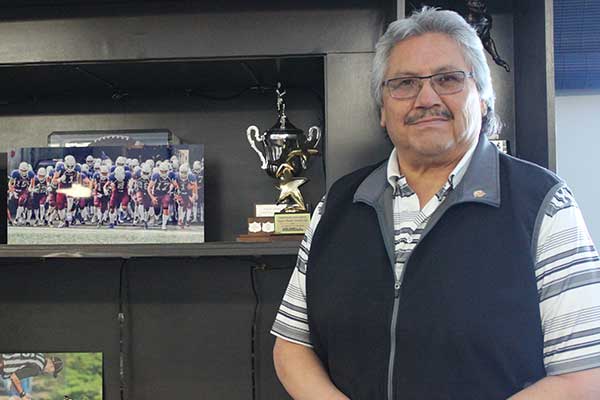 Keith Pratt, First Nations advisor to the Regina Pats and Regina Thunder enjoys being able to share his culture with those involved with the teams and feels this is a step in the right direction towards reconciliation. Photo by Kaitlyn Nordal

Keith Pratt wants to pass on lessons learned from sport to a new generation of athletes through his role as First Nations advisor to the Regina Pats and Regina Thunder.

Through this role Pratt hopes to educate others about culture, how sports can bring camaraderie, build responsibility and teach the value of hard work.

Having an Indigenous man in the organization in this capacity may help other Indigenous athletes feel more comfortable to try out for the team.

“If you look at any kid that has been involved in minor hockey through the years, when they get older, they still have those longtime friends and they stay out of trouble. I think with a First Nations face around here, more may feel comfortable,” he said.

Pratt, of Muscowpetung Saulteaux Nation, was involved with hockey in his childhood. He got back into it in 1975, when he started working at the Paul Dojack Youth Centre. He continued until retiring in 2011.

“It was always a sporty place,” Pratt said.

The centre’s namesake, Paul Dojack, had had a long and distinguished career as a referee in the CFL from 1941 to 1970, and later worked at what was then known as the Saskatchewan Boy’s Training School. Drawing on his time in the CFL, Dojack brought in players from the Saskatchewan Roughriders to work with the youth.

The open and closed custody facility was renamed in 1985 to honour Dojack.

In fall 2017, Pratt was asked if he wanted to be involved with the Regina Pats, as the organization was interested in participating in Truth and Reconciliation.

Pratt started by inviting chiefs and other First Nations leaders to the 2017 Memorial Cup tournament and introducing them at each game.

Such acknowledgement of First Nations leaders continued into the 2018 season.

Pratt has been the First Nations advisor to the Regina Pats, a junior hockey team in the Western Hockey League, since then.

“That’s how it kicked off the following season. We introduced Treaty 4 leadership at each Pats game and a youth holding the flag. We’d get youth from all over Treaty 4,” said Pratt.

Pratt has since been asked to also serve as a First Nations advisor to the Regina Thunder, a Junior football team.

He sees his new role as answering the Truth and Reconciliation Commission’s Calls to Action 88 to 91.

“The real message with the Thunder and Pats … is bringing in the Truth and Reconciliation. That’s the main thing Section 88 to 91 talks about, having First Nations involvement in sports, and that’s how I represented it to them,” said Pratt.

In January, Pratt joined the Board of Directors for the Regina Thunder, a junior football team, as their First Nations advisor.

As part of this this volunteer position, Pratt guides the board and players on everything from explaining treaties to ensuring ceremonies are conducted properly.

Head coach of the Regina Thunder, Scott MacAulay, first met Pratt when MacAulay was in high school and Pratt was the uncle to one of his football teammates. They were able to reconnect when Pratt took on his new position.

MacAulay is happy with their partnership.

“You have someone you can reach out to and use as a person to not only guide yourself, but also if some players are struggling, moving from different parts of the province to Regina.” said MacAulay.

Having Pratt on the team helps bridge cultural divides and bring the team closer together.

“With the amount of Indigenous people who are coming onto our team, it would be good to bring in an advisor who could help us in that area – some education on the different cultures and how to interact with everybody and how to bring everyone together,” said MacAulay.

“If you look at some of the sporting events, there aren’t many First Nations kids playing in sports, other than minor hockey or minor football but, when they get older, you want to see them succeed.” he said.