The Saskatchewan Rush have locked down a home playoff game, extending their winning streak to six games in the process, thanks to an 11-9 victory over the Calgary Roughnecks on Saturday night.

The win completed a regular-season sweep for the Rush (10-3) over the arch-rival Roughnecks (6-9) for the first time in team history as they claimed wins in all four meetings. With the victory, which came in front of a franchise-record sell-out crowd of 14,941 at the SaskTel Centre in Saskatoon, the Rush also remained in a tie with the Colorado Mammoth for first place in the National Lacrosse League’s West Division.

Special teams were the difference-maker for the Rush as they clicked for five power-play goals plus a league-leading 14th shorthanded goal. 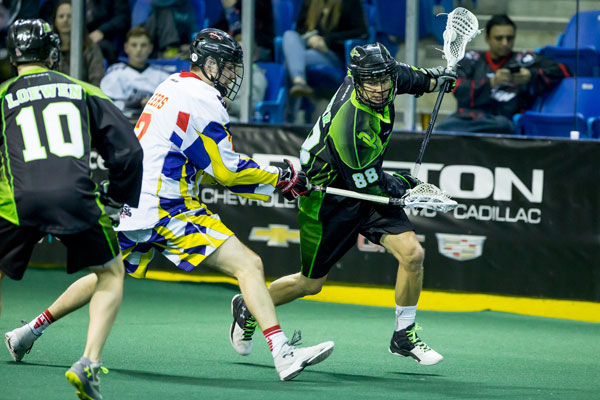 Saskatchewan got off to a hot start on a goal by Mark Matthews and power-play tallies from Robert Church and Riley Loewen. With the teams playing 4-on-4, the Rush took a 4-2 lead when Ben McIntosh converted a pass in front of the net from Chris Corbeil on a 2-on-1 break.

Leading 4-3 after the first quarter, the Rush scored three straight starting with the shorthanded goal coming from Zack Greer, who brushed away from two Calgary defenders and fired a shot past Roughnecks goalie Frankie Scigliano. Defenceman Brett Mydske got the next for the Rush – his first goal of the season – and Matthews made it 7-3 when he wheeled off the half-wall, moved into the slot and powered a shot to the back of the net. The Saskatchewan power play went back to work late in the second quarter as Robert Church hit a hot bouncer off the turf and through Scigliano’s legs, and McIntosh followed with a quick-stick strike at the side of the net just before half to make it 9-5 at the break.

Calgary took advantage of penalty troubles for the Rush in the third quarter. With Adrian Sorichetti already in the penalty box, Saskatchewan defenceman Ryan Dilks was called for a high-sticking major putting the Rush two men down which ultimately led to a goal from Curtis Dickson. Dane Dobbie followed with another Roughnecks’ power-play goal, and Dickson was back for more as he buried his 50th goal of the season with a long-range low shot to make it 9-8.

The Rush were held off the scoreboard in the third quarter but finally ended the goal-less drought to regain a two-goal lead as Sorichetti made a brilliant pass to Matthews at the edge of the crease, and his deftly timed one-touch swipe notched his hat-trick goal. Dickson’s hat-trick goal made it 10-9 but the Rush held tight the rest of the way, and a late penalty call on the Roughnecks led to an empty-netter from Jeff Cornwall to wrap up the result.

Matthews finished with a six-point effort (3 goals, 3 assists) while Church racked up five points (2 goals, 3 assists). Goalie Aaron Bold totaled 36 saves for Saskatchewan with many of his best coming during Rush penalty kills.

Next up for the Rush is a trip out to New England for a clash with the Black Wolves on Friday, April 8th.