Ever since she was a little girl, Devon Fiddler has always had an interest in fashion and design.

Fiddler had been working as a business development manager for three years before starting her handbag, accessory, and clothing line called SheNative.

She was inspired to start SheNative in 2011 after a speaking engagement she was attending. The brand then officially launched in 2015. 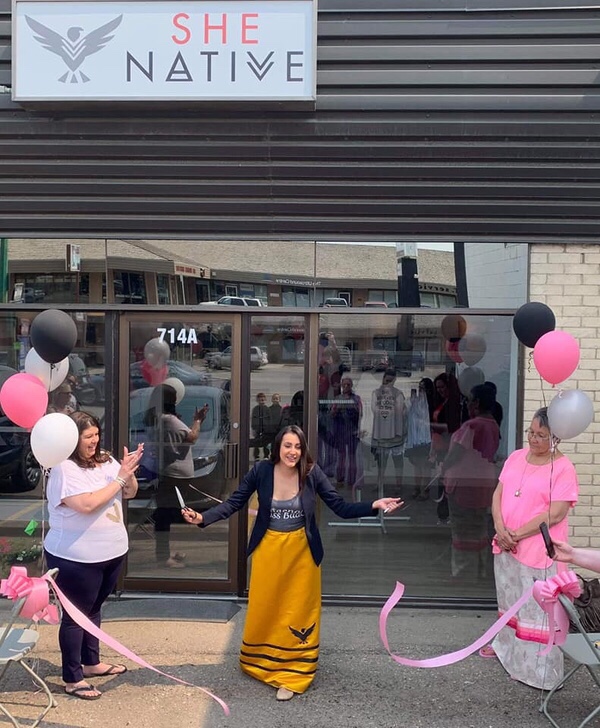 Devon Fiddler cuts the ribbon in front of her new retail space in downtown Saskatoon. Photo by Amanda Sanderson

Fiddler started her brand with the hopes of using it to empower and change the perception of Indigenous Woman and girls.

After years of doing pop-up shops and having spaces in Midtown Mall and Centre Mall, she decided it was time to open her own store.

This dream finally came true earlier this month in Saskatoon when SheNative opened their flagship store. Those in attendance were mostly friends and family and those involved with SheNative since the brands inception.

“We decided we needed a permanent location where we can promote other brands and artists including SheNative,” said Fiddler. “That’s part of our whole strategy of giving back and empowering other Indigenous females who are artists and designers and try to involve them in our process.”

The day started off with a ribbon cutting and prayer said by Elder Judy Pelly. A smudging session then took place in the parking lot and inside the store, which was also done by Pelly.

A panel session with her and two staff members was then held to talk about the new direction of SheNative, what they hope to achieve, and why open a new location.

Those involved with SheNative also opened up their new store to have more flexibility and to not have to worry about stipulations imposed by a mall.

It was also important to them for a more important reason; community.

“I feel like when we didn’t have space for people to come shop for SheNative, we lost a lot of our local community members who would normally come and shop in our space,” said Fiddler. “We have a lot of pride in our community. A lot of people are proud we have a SheNative store in Saskatoon.”

Tori-Lynn Wanotch, Dirctor of Business Growth and Marketing and Design for SheNative, has been with the brand officially three years now and is happy about a set venue for the store.

“Now everything that SheNative does has the ability to do it all in one place. Our entire team gets to be together…it really feels good to have our entire team together,” said Wanotch.

Wanotch also feels having their own place in this way is a step in the right direction for how the brand wants to grow in the future.

“Because we have everything in the same place it’s going to give us a stronger springboard to be able to reach the brand out further which is going to be part of our goal in the next little while is to see the brand and our label in other boutiques across the country.”

The new store which will have retail in the front and workspace in the back is located at 714A 2nd Ave N. in Saskatoon, Saskatchewan.