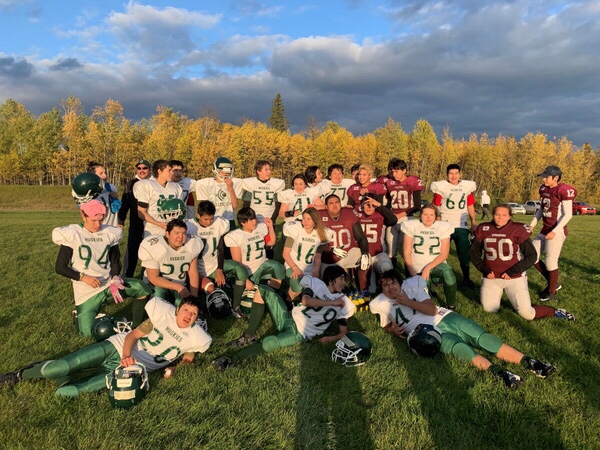 The third week of Northern Saskatchewan Football (6-aside) saw four exciting games played across the province. During the first game of the week on September 24th, the Senator Myles Venne Huskies won their first ever game shutting out the hometown Beauval Voyageurs by a score of 43-0. Jonah McKenzie and Virgil Bear each led the Huskies with three touchdowns each.

On September 25, a double header of games was played by all teams that were 2-0 to start the season. In the first game, the Creighton Kodiaks travelled to Cumberland House. It was a close game throughout, with Blake Alexander scoring two touchdowns for the Kodiaks, while Kaydin Chaboyer scored three to lead the hometown Cumberland House Islanders to a 34-28 victory. In the second game, the Ahtahkakoop Titans remained unbeaten with a 24-12 victory over La Loche in a game played under the lights in Prince Albert.

On September 25, the Pinehouse Lakers travelled to Sandy Bay to take on the T-Wolves. Indie Bear, Forest Bear and Thunder Bear each scored two touchdowns to lead the T-Wolves to a 48-12 victory.

In 9 aside action, the Nipawin Bears travelled to La Ronge to take on the Churchill Chargers and won the game by a score of 66-7.