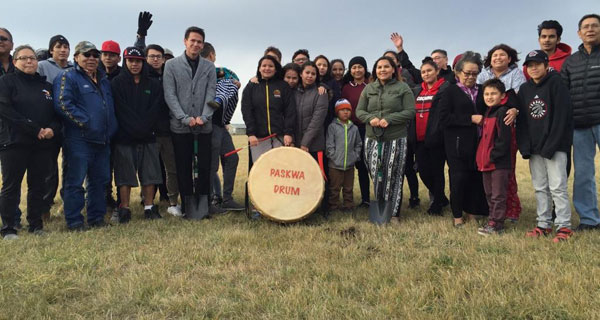 A youth recreation centre is one step closer to becoming reality on a southern Saskatchewan First Nation.

Pasqua First Nation, 60 kilometres northeast of Regina, held a cultural sod-turning ceremony on October 25th in the community to embark on a future youth recreation centre that will soon be built.

“This is pretty significant and important for Pasqua; we decided to have a sod-turning ceremony. Our community navigator, Jessica Gordon, coordinated the whole event,” says Fabian Ironeagle, a Pasqua First Nation council member. “We’ve got a couple of our elders together and two of our youth representatives there who put the shovel in the ground. It was a wonderful experience.”

Reighlene Peigan, the community’s female youth representative, says the youth was excited when they received news that they were going to be getting a youth recreation centre.

“I’ve been wanting a youth centre since I was nine,” says Peigan who is now 17-years-old. “I’m happy for my little [five-year-old] brother that he’s going to have somewhere to go when he grows up.”

Peigan said she felt humbled and blessed to participate in the sod-turning ceremony and representing the youth of her community.

“I thought I was going there to watch, but we actually got to shovel the elders prayed and put tobacco down. It was so awesome to see,” she adds.

Peigan, who takes input and ideas from the youth and tells it to the councilors, says the youth recreation centre will benefit the youth a lot and offer them a variety of programs to keep them occupied.

“The kids who going down the wrong paths, they usually do that on the weekends and evenings, this will be a safe area to go,” she adds. “The elders can teach us about the past and where we came from.”

A rendering of the interior of the future Pasqua Youth Centre.

Ironeagle said in late June, Indigenous and Northern Affairs Canada (INAC) put a call out for proposals. Ironeagle and two other staff members had three days to grab all the required data and put their application together—including a conceptual drawing of a building from Wendell Peigan, owner of WP Construction.

About six weeks later, Chief Todd Peigan got a hold of Ironeagle and broke the news that they were approved for the youth centre.

“It’s a dream come true for us…the youth centre has been at the top of the list out here for years,” he says. “Having this youth centre enhance services that we already have for our youth.”

Ironeagle and his team put the amount of $900,000 on the proposal but INAC approved them for $750,000. Following the news, Ironeagle contacted an engineering company that his community works with called Associated Engineering and started setting up meetings.

“Our youth is excited for this project; this is going to be their building, not ours. We’re going to provide a worker there who will provide programming for them,” says Ironeagle.

Peigan says once the youth recreation centre opens up, they plan on creating activities geared to the youth such as; sewing, make pow-wow regalia, moss bags, games and movie nights.

“[The youth] are so excited as well, they can’t wait until June comes,” she adds.

The sod-turning ceremony embarked on the start of the project which is expected to be completed at the end of June of next year and are hoping for a grand opening ceremony in early July.