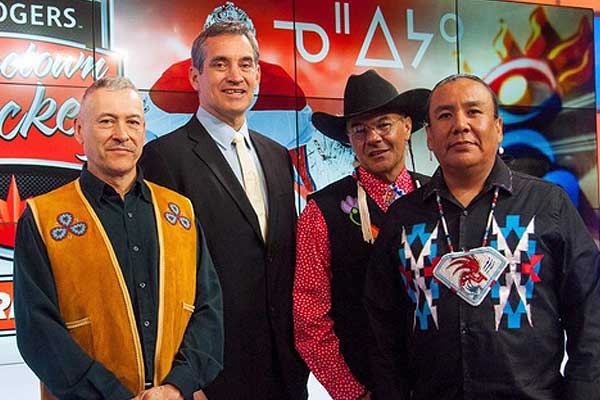 In a recent announcement, Sportsnet and APTN will partner to broadcast more NHL games in Plains Cree over the next three seasons. This three-year agreement followed a historical moment in Indigenous history when NHL broadcasted a first ever hockey game in the Plains Cree language last season which was in conjunction with Rogers Hometown Hockey’s visit to Enoch Cree Nation, Alberta.

In a prepared statement released on December 16, 2019, Sportsnet and APTN will be expanding their partnership to deliver more games over the next three seasons.

“Last year we partnered with APTN to deliver the first-ever NHL game in Plains Cree and saw first-hand the positive impact it had uniting hockey fans across the country,” stated Rob Corte, Vice President, Sportsnet & NHL Productions. “We know that Canada’s Indigenous communities have a great passion for hockey and we are excited to grow our partnership with APTN to deliver more games over the next three years.”

Sportsnet will continue to deliver the broadcast production, which will feature exclusive Cree-language commentary and analysis from APTN broadcasters for fans across the country. Broadcaster Clarence Iron will have the play-by-play call for APTN, while Juno Award-winning musician Earl Wood will host the studio show alongside influential Cree-language promoter Jason Chamakese from the Chitek Lake First Nation, with game analysis from NHL alum John Chabot.

“By teaming up with Sportsnet and broadcasting more games in Plains Cree, we can connect with Canadian hockey fans and share the beauty of Indigenous languages and cultures,” said Jean La Rose, outgoing CEO of APTN. “We are very excited to know we will soon hear more cries of kociw osihew, pihtokwahew! – he shoots, he scores! – across the country.”

The upcoming agreement will include a minimum of six Cree-language NHL broadcasts per season with the first game that will feature the Winnipeg Jets vs. Chicago Blackhawks, Sunday, Jan. 19 at 6:30 p.m. ET / 3:30 p.m. PT on APTN.

In total, a minimum of six games per year will be broadcast on APTN in Plains Cree – full 2019-20 broadcast schedule below.