For many communities, sports can be something that brings people together and helps build a sense of comraderie. In Standing Buffalo Dakota Nation, lacrosse has done just that. 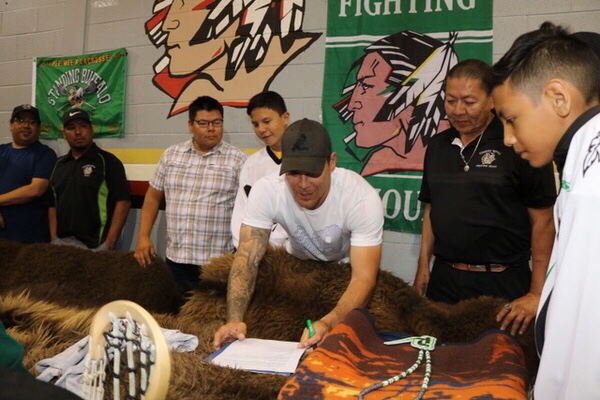 Russ Matthews, who is now the Director of Lacrosse on Standing Buffalo, has been playing the sport his whole life.

When he moved to Standing Buffalo in 2009, he introduced the sport to the community as he noticed nobody played it and it took off from there.

They now have nine certified coaches and three referees and are the only First Nations community in Saskatchewan to have a full set of lacrosse teams.

“I am looking forward to working with Standing Buffalo Lacrosse program and passing down the values and skills I have received,” said Shattler in a press release.

Shattler has played lacrosse professionally for the last 13 years, playing for The Calgary Roughnecks and Saskatchewan Rush. While playing for these teams, he has helped win National Lacrosse league (NLL) championships among other awards.

As Director of Player Development and Coaching, Shattler will be responsible for helping coaches, parents, and teachers. While working three days a week at the school, he will work with all the kids in the program.

“He’s an outstanding lacrosse player and he is interested in pursuing that and becoming a lacrosse instructor. We were lucky to get him to come to Standing Buffalo and work with us,” said Matthews.

“I can’t wait for the new season to start with him,” said Laswisse