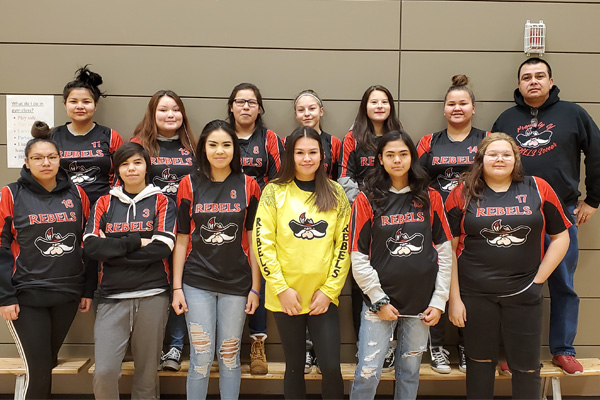 This past season, the girl’s team was made up of 17 players from Beardy’s and Okemasis and 1 Metis from Duck Lake for a roster consisting of players of 100% aboriginal decent.

The girls had a very successful season. First, repeating as champions of the Treaty Six Invitational held at Rosthern Junior College, then posting an 8 win 3 loss and 2 tie record, and finishing the season as one of the top 5 teams in the entire province.

“It makes us feel very proud that our hard work paid off and finding out we were role models for the younger girls in the school. Hearing that girls in the younger grades wanted to be like us is hard to describe,” they stated. “We didn’t even realize we were 100% aboriginal till season ended, we just went out and played the game we love, even our coach is from Beardy’s too.”

Coach Herb Seesequasis, also from Beardy’s and Okemasis, has been working at Stobart since 2002 has been with the girls’ team since 2011 and has guided them to the Provincial Championships 5 times.

The girl’s team will be provincial hosts next year.