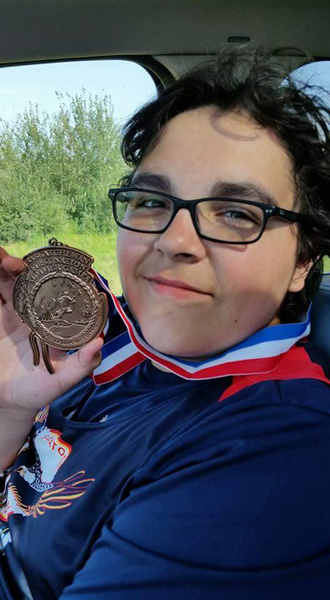 This is his first time participating in the Saskatchewan Indian Summer Games, which is held in Ochapowace First Nation this year.

So far, he has been enjoying his experience saying it is a great sporting event for everyone to gather together.

“Its pretty good, I love how its like the Olympics but for First Nations people. It’s like if someone who doesn’t have much opportunities, they can go and get a cool experience,” he says.

Talon first started canoeing on a class trip in school and the passion for the sport lingered with him since.

“I live in Saskatoon so I practice on the Saskatchewan River.”

His role models that push him to succeed are his father Terrence Ahenakew and his coach Dale MacCallum. Their persistence has led Talon into considering his career goals after he completes high school.

“I plan on attending the University of Saskatchewan to study architecture,” he says.

Aside from his passion for canoeing, his other hobbies are drawing and playing video games. His advice for the youth who want to pursue a passion in sports is to never give up. Talon hopes to take home a gold medal but most importantly, he plans on taking home the memories that he has built from his first year as a summer games athlete.


< Back to EFN Sports