Now that Mike Tanton has been name Chef de Mission of Team Saskatchewan for NAIG 2017, he has played every possible role at NAIG including spectator. 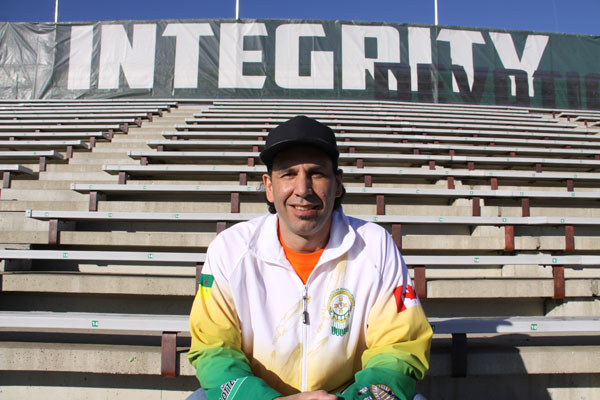 “I went to my first NAIG in 1990 at the age of 13 in Edmonton and I was blown away. It was like the Olympics. The biggest thing I had ever seen and I couldn’t believe how many Aboriginal people were there,” said Tanton in an exclusive interview with Eagle Feather News over eggs and coffee at Nellie’s on 22nd. “I was just starting to see how the world works and this blew my mind.”

Tanton has attended every NAIG since. First he qualified as a basketball player. His team’s best finish was in Victoria where they got fourth. “Most importantly in Victoria I got to sit with basketball great Steve Nash and talk about the game with him. I asked his advice. He told me to go for it. Little things like that help you believe in yourself.”

After he became too old to play, he became the coach where he had the pleasure of coaching current 3 on 3 international star Michael Linklater. “Mike and his era were great players and it was important to mentor on the next generation.”

Eventually, Tanton went on to play with the University of Saskatchewan Huskies. He has been involved in developing grassroots basketball programs across Saskatchewan. His community work eventually led to him being the Director of the White Buffalo Youth Lodge. He has been working for PotashCorp at the Cory mine for the past several years.

Being named the Chef de Mission is the topping on the cake for Tanton and allows him to do that community work that is so important to him. “I have been away from the community for a while....gone underground if you even want to say it, but being back working with the community in this context gives me the best of both worlds,” said Tanton. “It means a lot and is very cool how I came full circle from fan to this position. There is a different dynamic now and I have to work with kids and adults and show them it is more than just a game. I want to help them and push them to be better. I miss working with and helping people.”

Juggling time underground with the important demands of being Chef de Mission will be a challenge, but Tanton is up to it. “I have a varied schedule that allows me time off during the days sometimes and my site has embraced my opportunity,” said Tanton. “They will give me some flex and time off and I can take holidays or use banked time. It will be great.”

Tanton will lead about 500 athletes, coaches and mission staff to Toronto for the North American Indigenous Games which is set to take place from July 16-23 2017. The group is in the midst of raising the $1.3 million it takes to get the youth to Toronto.

Team Saskatchewan finished second in 2014 when the Games were held in Regina. Though he doesn’t want to predict a finishing spot for next year, Tanton does know the athletes will have a life changing event. “We have a great team of athletes so far and we have a great management team with our committee and with SaskSport and the Sport For All coordinator over at the Federation of Sovereign Indigenous Nations,” said Tanton. “We are doing this as a team, not just me thinking I’m in charge. I’m pretty revved for this.”