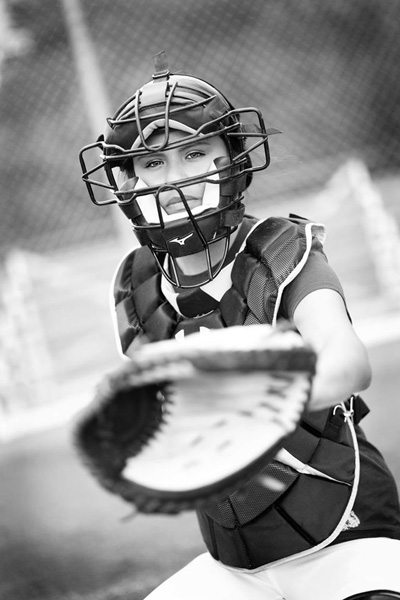 Cameron, a 16-year-old from Beardy’s and Okemasis First Nation, is a back catcher for the Team Saskatchewan softball team that recently competed at the 2015 Western Canada Summer Games, August 12 to 16 at Fort McMurray, Alberta, and won the bronze medal. Prior to that event, Cameron competed with the Saskatoon Remax Selects at the U18 Midget Nationals on August 2 to 9 in Montreal. She is proud to follow in the footsteps of her other family members.

“I wanted to try out for Team Saskatchewan because my mom and auntie both tried out and made this team as a pitching and catching duo. I wanted to show them and myself that I could do it,” said Cameron. “My Mom and I have similarities with this team. Mom and I are First Nation Cree women from Beardy's and Okemasis and both made this team as back catchers and both the youngest players on the team.”

Like her mother and aunt before her, it was a long and difficult process for Cameron to make Team Saskatchewan. Over the course of the two-year-long tryouts, Cameron constantly tried to best the Team Canada workout requirements and norms. Every day she would see how many push-ups and sit-ups she could do in a minute and every day she got a better result.  She spent plenty of time in the gym with her teammates practicing throwing accuracy and framing. She even used whiffle balls and a mat to practice blocking during the winter months.

“I was very determined and focused on making Team Saskatchewan,” Cameron said. “My hard work, commitment and dedication to working out has paid off because I get to represent the province as one of the athletes at the 2015 games.”

This high level of determination has been consistent throughout Cameron’s softball career. When she was nine years old, she first picked up a ball, glove and a bat at her brother’s ball game and fell in love with the sport.

Cameron started playing softball in Prince Albert as a squirt and continued in to the midget years. While she was with the Prince Albert Aces, the team travelled to places like British Columbia and Ontario for Midget National Championships. She went to the United States with Tommy Douglas Softball Collegiate for training at the University of Arizona. Thanks to her dedication and talent, Jamestown University in North Dakota (who has been interested in Cameron since Grade 10) has offered her an above average scholarship.

“Mom and dad always tell me, ‘Good luck and work hard; you never know who is watching,’ ” said Cameron. “That saying is so true because I did not even know Jamestown was watching me.”

Cameron has not yet decided where she will attend university in the fall. She is looking for a school that will allow her to pursue her passion for the game while obtaining a quality education. She views sport as a vehicle that can steer her toward a better life. For example, sport has helped guide her away from drugs and alcohol.

“You need strength, passion and persistence to play a sport. It takes commitment and hard work,” Cameron said.  “I am always trying to become ‘my’ best in softball. Softball is a lot of fun and you get to meet lots of people.”