The team effort paid off for the PA Raiders 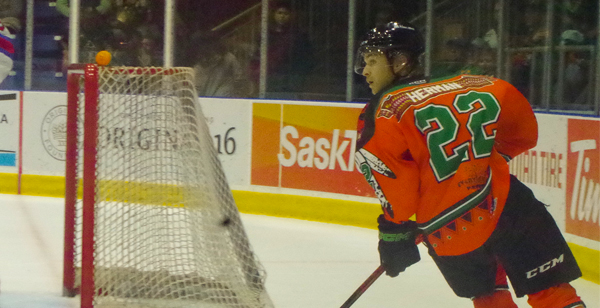 PA Raiders Forward Evan Herman said, as a Métis person, he was proud his team did something special to recognize Orange Shirt Day and sees it as a positive step forward in terms of Reconciliation. Photo by Marjorie Roden

Although the Orange Shirt Day jerseys were to be worn one-time only, an entire team of artists worked on the design over a period of a couple of months.

That day, the Raiders had their first win of the season over the defending WHL champions, the Edmonton Oil Kings, 5 to 1.

James Stonechild, one of three members of the design team, said he was honoured with the invitation to help create the unique design.

“It was a humbling experience to work with the younger group,” he said. “Everybody’s got a different idea about what the meaning is. It all comes to the same thing.”

He said the design team took a collaborative approach, which meant there were revisions that happened over the two-month period.

“We had that opportunity to design and then come back and make another design,” said Stonechild. “We had to make sure we were all expressing ourselves.”

Anthony Anasuskope was another of the artists invited to help create the jersey design.

“They asked me to think of something for ‘Every Child Matters’, so I did some quick sketches,” he said. “I think I did five rough ones, in different directions, and they picked one. From there, I did some more work on it, and made five different variations of that one, and then they went with one, and it is what it is now.

It took him about a month to create his vision; then the artists all worked together to finalize the final version.

Brad Tinker was another artist who was involved in the project and was impressed with the amount of support there was throughout the Raiders’ organization.

“We all worked together with Mann Northway (Auto) and the owners of the Raiders, to pick the layout and everything,” he said.

Anasuskope was one of the younger members of the artistic team, and certainly has big plans for his future.

“My main goal is to put myself out there and show young kids who like to do art that it’s okay to put yourself out there, and not be afraid to fail because you’ll never know unless you try,” he said.

Although most artists tend to work in isolation, Anasuskope has no regrets about being part of this particular design team.

“Whether I get anything out of it or not, it’s still good,” he said. “I still love creating art.”

Anasuskope encourages other young artists to keep at it, if that’s what they enjoy.

“Art and everything else can open up doors, and bring you opportunities that can help to inspire other people as well,” he said.

The game-worn jerseys were auctioned off online. The first three sold belonged to Dallyn Peekeekoot, Tre Fouquette, and Evan Herman, all of whom are Indigenous.

The money raised by the team is to support local Indigenous sports and education programs.