A male volleyball team recently earned the 1A Provincial 2018 Champions title. The Piysew Awasis Thunder Volleyball team from Thunderchild First Nation achieved an undefeated season record in league play, entry into three Saskatchewan High School Tournaments, exhibition games vs 2A – 3A – 4A and 5A high school teams, Provincial Conference and Regional Tournaments and through the Provincial 1A tournament held at Middle Lake, SK., which led to their latest victory.

“It was super exciting, it was one of the best feelings ever,” said team member Ryzen Walkingbear. “Winning one of the biggest titles around was a surreal feeling.” 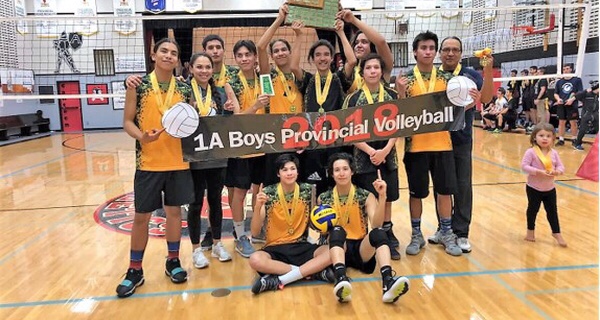 The team of 10 will be saying farewell to two of their players, Walkingbear and his brother Askiy, who have signed by Olds College in Alberta. He lives and breathes volleyball and has played the sport since he was three years-old until today where he continues to train at volleyball twice a week. He was also named the U17 Male Athlete of the Year in the province by Sask. Volleyball. In his final year of high school, Walkingbear will continue playing the sport while studying sports management at Olds College. It’s a path that he is following the footsteps of one of his older brothers, Savana Walkingbear.

“My brother told me ‘if you have a balance between education and sports, volleyball can take you far’,” he said.

Coach Winston Walkingbear is also the trainer of the Piysew Awasis Thunder Volleyball team and has been involved with the team since last year when they were under the U16 category. He said the team’s focus is to stay in school and to follow the concept of ‘warriors’ based on team unity and family support.

Earlier this year, their team won a prestigious tournament called the U of S Huskies Volleyball Interprovincial tournament.

“It was a first time that an Indigenous team won that,” he said. “That really built a momentum going into our high school season. Right to the finals, we won undefeated.”

Coach Walkingbear trains his players year-round. He also takes the boys out on the land along with elders which is part of the experience to get them connecting back with the land.

“There’s a whole process of preparation that we do with them. But it’s also physical training…out in the big chunk of land,” he said. “The journey began out on the natural land in preparation of the astonishing and successful season and striving to stay in school.”

The Piysew Awasis Thunder Volleyball team is preparing for the FSIN Volleyball championship tournament in December.