When he first made his debut in the National Hockey League with the Nashville Predators on October 9, 2003, Jordin Tootoo not only made history as the first Inuk to play in the NHL. He also beat all odds to make the opening night roster for the 2003-04 Nashville Predators.

Across the great Country of Canada, many First Nation, Metis, and Inuit people were celebrating the rise to stardom for the 5’9”, 199 lb right winger as Canada’s Pride and Joy. 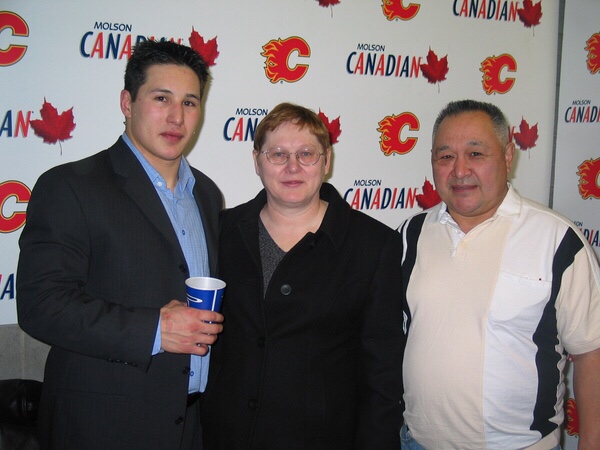 Jordin Tootoo with his parents.

Many colleagues who are established sports scribes wrote that Tootoo wouldn’t last the full season and seriously get hurt due to his size. But lo and behold, Jordin Tootoo played 13 seasons in the NHL and on Friday, October 19, 2018, he called it a career.

Tootoo made history when he was drafted 98th overall by Nashville in 2001. He played most of his career with the Predators and also spent time with Detroit, New Jersey and Chicago. Tootoo last played in the 2016-17 season, when he scored two goals and an assist in 50 games with the Blackhawks.

Toots, as he is known to his teammates, announced his retirement in Brandon, Man., where he became a star with the Western Hockey League’s Wheat Kings. 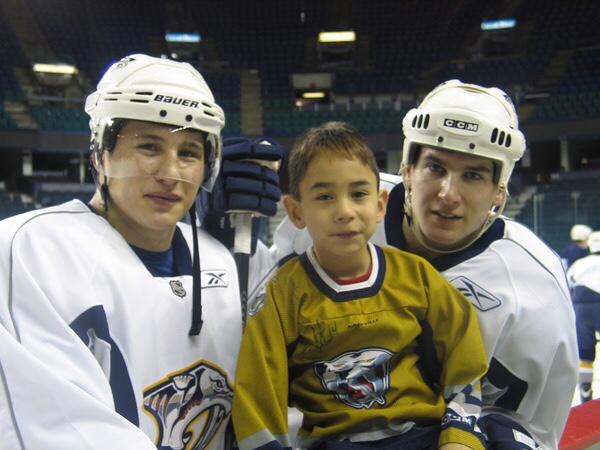 Jordin Tootoo with a fan.

“When I came to Brandon in 1999, I didn’t think of myself as an Indigenous role model. I was just a hockey player that would fight with everything I had to make the NHL,” Tootoo said. “This community embraced me and looked beyond my background and just judged me for how I played the game. And it’s pretty special and symbolic to come full circle and be back here to announce that I have retired from the NHL.”

Tootoo accumulated 93 goals, 209 points and had 874 minutes in penalties in 220 career games with the Brandon Wheat Kings. He ranked third on the club’s career list for penalty minutes and 11th in scoring among right wingers.

“I look back and I reflect on my hockey career and the opportunities it’s given me away from the game,” Tootoo stated. “Personally I didn’t think it would go this far but I am grateful for everything that’s put in front of me. It’s been a tremendous ride.”

"It's difficult to describe the emotions I feel as I look back. I'll sum it up in one word: gratitude. The camaraderie with the players and the connection with the fans is one thing you need to experience to believe. It has enriched my life beyond words,” added Tootoo.

"I'm retiring with no regrets," said Tootoo, who hails from Rankin Inlet of the Nunavut Territory that has a population under 3,000. "It's been a great run and now it's time for me to move on to the next chapter of my life.”

"I know I will always remain close to my native roots and will continue to work to enhance life for native children who are suffering . . . I want to work with communities to create awareness around mental health and to support suicide prevention initiatives."

In 2011 he started the Team Tootoo Fund to assist nonprofits addressing suicide awareness and prevention, and supporting at-risk youth — topics that hit close to home. Tootoo lost his older brother Terence to suicide in 2002 following an arrest on drunken driving charges.

"His final words to me were, 'Jor, go all the way. Take care of the family. You are the man,'" he said at the press conference announcing his retirement. "I can only hope that I lived up to your expectations, bro."

Knowing the family on a personal basis and the challenges they’ve endured in losing a loved one, it gets quite emotional listening to Jordin at his press conference. As a sports reporter, my family have been blessed with the opportunity to visit his hometown of Rankin Inlet and spend time with Barney and Rose.

The very humble parents have certainly done well for themselves and encouraged their children to challenge themselves to be the best they can be and that’s all a parent can ask for.

Tootoo gives much credit to the city of Nashville, where he spent the first eight years of his career, with helping him get through the grieving process. He also thanked Predators general manager David Poile and former Nashville coach Barry Trotz for helping him realize that he needed help with his alcoholism, and Red Wings general manager Ken Holland, who believed in him during his recovery.

Tootoo, who became emotional during his speech, credits everything to hockey.

"I will leave this game at peace with myself, with the love of my family and with the memories that will last a lifetime. I owe my life to this game," he said.

On Saturday, October 18, a classy gesture once again by the Edmonton Oilers organization as they welcomed Jordin’s wife and two children and honoured 22 before the puck drop with a video tribute of his career.

The next chapter begins for Jordin Tootoo and he will do well and a great spokesman against youth suicide across Canada.