Week 2 has it all: close games, lop-sided victories 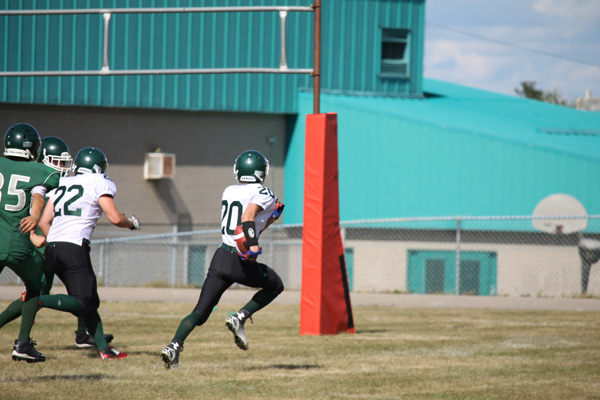 Northern Saskatchewan Football has had a fantastic second week of action.

On Tuesday, September 8 the Beauval Voyageurs travelled to Pinehouse to take on the Lakers. The Beauval squad surprised the home team with an impressive display of speed and built a 36-6 lead by halftime. Not giving up, the defending Western Division champions returned in the second half to score 26 consecutive points, only to turn over the ball on downs with time running out in the game. The final score was Beauval 36-32 over Pinehouse.

On Wednesday, September 9, the Green Lake Spirits traveled to La Loche and overwhelmed the hometown Lakers with tremendous speed and power on the offense and defense. Leading the visiting Spirits, with a record nine touchdowns, was Braedy Sinclair, and a final score of 94-6 for Green Lake.

On Thursday, two games were held in the La Ronge area. The first game was at the Lac la Ronge Indian Band, with the host Senator Myles Venne Huskies taking on the Creighton Kodiaks. The defending champion Kodiaks were led by Tyler Williamson who scored five touchdowns and paced the Kodiaks over the Huskies by a score of 78-6. Will Thompson added two interceptions and two touchdowns for Kodiaks.

Later in the afternoon and across town in La Ronge, the Chargers hosted the Cumberland House Islanders. The Islanders played tough all first half, leading 16-0 at halftime. On the kickoff, Brandon Fiddler returned  the kickoff for a touchdown and Ferris McKenzie kicked the two point convert to extend Cumberland’s lead to 24 -0. The La Ronge team were able to turn things around and come back with two touchdowns by Jacob Glover and one by Sean Tingley. Each of the touchdowns were not converted leaving the Chargers down by six points on their last possession of the game. With 46 seconds left in regulation time, Draven Bird was able to tie the game with his first touchdown of the season. Once again, the Chargers were unable to convert and at the end of the regulation time, the score was tied 24-24 in front of an ecstatic La Ronge crowd. In overtime, Cumberland House had first possession and Brandon Fiddler ran the ball in to the endzone, and then kicked a convert to give the visitors and eight point lead. On La Ronge’s possession, Robin Lewis was able to reply with a touchdown of his own, but the Chargers could not convert again. The Cumberland House Islanders prevailed in a very exciting overtime game over the La Ronge Chargers by a final score of 32-30.

Looking ahead at week three of Northern Saskatchewan Football action, the Pinehouse Lakers will travel to Green Lake on Monday. On Tuesday, Buffalo Narrows Eagles will host the Beauval Voyageurs. On Thursday, the La Ronge Chargers will play the Senator Myles Venne Huskies. Rounding out the week, the Cumberland House Islanders will be in Sandy Bay to take on the T-Wolves on Friday afternoon.