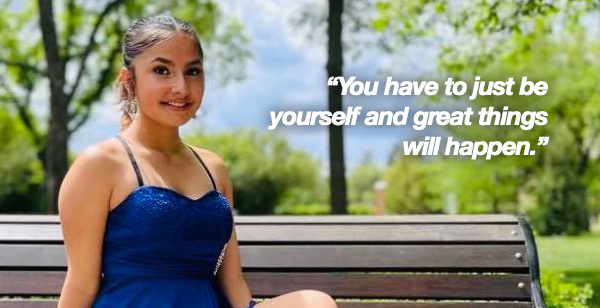 16-year-old Paige Anaskan, a Miss Teen Canada contestant, is competing so she can share a message of body positivity with the world. Photo supplied


Mahatma Gandhi once said “be the change you want to see in the world” and that’s what Paige Anaskan is doing by participating in this year’s Miss Teen Canada Pageant.

The 16-year-old from the Piapot Cree Nation admits initially she was unsure about entering the competition.

Anaskan prefers to spend her time on the volleyball or basketball court. She’s also proactive in her community both on a personal level and a volunteer basis. Sometimes it includes picking up garbage around her neighbourhood because she believes that’s important. Most recently, as a student volunteer, Anaskan helped paint the new basketball court at the mamaweyatitan centre in Regina.

The idea about the pageant first started after her mother saw an advertisement on Facebook and encouraged Anaskan to enter.

“I didn’t think it was my thing,” she said. “I was scared to get judged for my skin colour and my race but then I really thought about it and I decided to do it.”

Anaskan believes being part of a national competition provides an opportunity, for her, to raise awareness about things she is passionate about.

“I wanted to show people what First Nations women can do,” she said. “I told the pageant ladies I wanted to spread that message and that you shouldn’t judge just from what you see.”

The Miss Teen Canada Pageant is to take place in Toronto in August over a two-week span.

The first week involves working with a coach to get her pageant ready. Together they will work on her walk, her look, her outfits, public speaking and everything else.

Anaskan is currently fundraising to cover costs for the competition that includes travel, clothing, tiara, sash and the additional expenses for one or both parents to accompany her because she is a minor.

For the talent portion of the competition, Anaskan has decided to sing.

“I love to sing,” said Anaskan who will be doing a rendition of Hallelujah by Alexandra Burke “Last time I sang it I had a lot of people in tears and it’s one of my mom’s favourite songs.”

For the speech portion, the teen is focusing on a social commentary about beauty and how it is something that comes from the inside and about getting to know someone before judging.

“I feel like beauty pageants have a certain image on how girls are supposed to look and you have to look like this or you aren’t suitable for them,” said Anaskan.

Although she is participating in a beauty competition, she believes beauty is not something that can be judged on physical appearance alone.

“I feel like girls push themselves to have that ideal body or that ideal model look and I feel like that’s not how it should be,” said Anaskan. “Girls should be comfortable in what they look like and shouldn’t have to change just because someone says you have to or because another person looks like that. You have to just be yourself and great things will happen.”

She hopes to use this new platform to continue the discussion on unrealistic beauty standards.

“I want to do it to show girls they should respect themselves more and not try to hide their natural beauty and let it show,” said Anaskan. “Once you let your true colours show, in my eyes, you are the most beautiful, unique girl out there.”

In the fall she will enter her final year of high school with plans to attend university and pursue something in the arts.