One student didn’t know his story of living a hard life surrounded by alcoholism, homelessness and abuse would inspire others, nor that it would result in winning an award.

Celystin Moosomin, a grade 12 student at Centennial Collegiate in Saskatoon, won the Spirit Award in this year’s 21st annual SaskTel Indigenous Youth Awards in Saskatoon. When he found out that he was nominated, he didn’t feel he deserve to win as he lived a life of hardships.

Ms. Kelly, an educational assistant at Centennial Collegiate, learned of Moosomin’s story after he started to confide in her at the school’s Spirit of the Youth room. This room is dedicated to Indigenous culture and a space to offer support to students.

“She nominated me because she felt that I been through a lot and I deserve a chance to get acknowledged,” he said.

Reopening old wounds, Moosomin became emotional as he opened up to share his story. He felt it was time to spill the truth of the kind of life he lived. 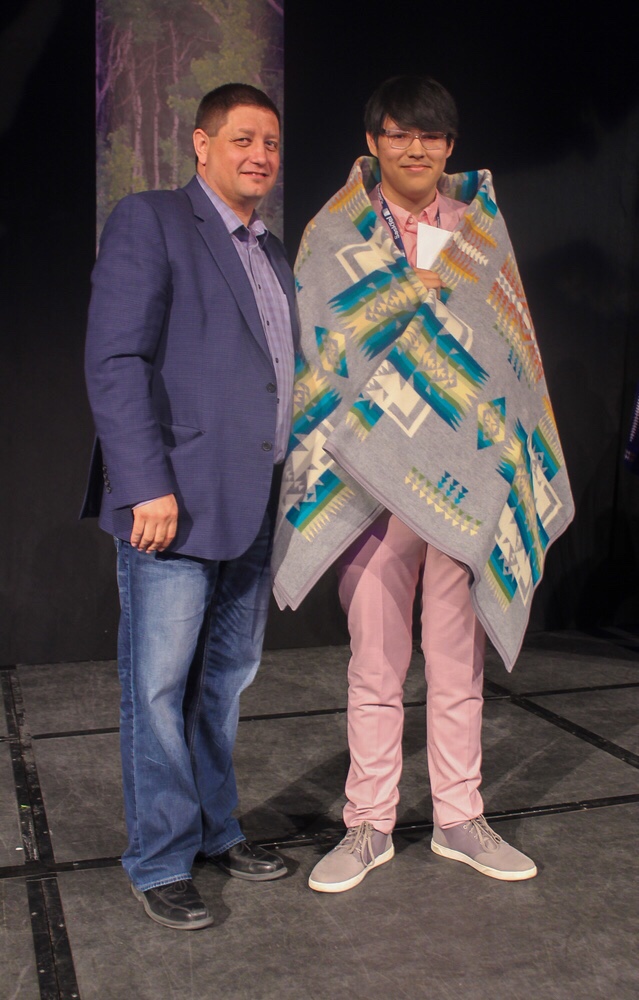 Moosomin grew up with a family of alcoholics. He endured physical abuse when he was younger which he said diminished his self-esteem. He recalled a traumatic event in his life when his father was stabbed five times when Moosomin was 9-years-old. When he moved to Saskatoon with his mom, there was almost two years where they were homeless.

“We were always couch surfing and trying to find somewhere to eat,” he said. “At the same time, my mom and my stepdad were abusing drugs while we couch surfed.”

Growing up, Moosomin would hide his younger brother in the bedroom to conceal the constant yelling and fighting in the environments they were in. It’s a chapter of his life that he closed behind. His younger and older brothers were in placed in different foster care homes and Moosomin now resides in a male group home in Saskatoon.

He hopes people can see there’s a life after violence and abuse.

“That is the goal is to help others feel better [with] my story,” he said. “I feel I need to talk about my story because if I don’t talk about it, it’s just sheltering it inside and there’s no point of sheltering the truth.”

When Moosomin heard his name being called as the recipient of the Spirit Award, he was shocked and excited to be acknowledged.

SaskTel and the Wicihitowin Foundation presented the awards to recognize Indigenous youth who have demonstrated exceptional ability, skills and cultural spirit in the areas of outstanding achievement, leadership, education, community service, culture, sports and recreation, fine and performing arts, technology and science, and spirit and innovation. There were a total of 12 awards that recognized outstanding achievement in each category.

“We received a record number of applications with 164 nominees this year and the momentum leading up to gala each year is growing,” said Committee Chair Colleen Cameron in a media release. “These awards have become so important to not just the youth, but their families and communities for the inspiration the awards and recipients generate.”

The SaskTel Indigenous Youth Awards seeks out to recognize today’s Indigenous youth who are excelling or are becoming a strong role model in their community such as Moosomin.

Moosomin will be graduating high school this month and is already looking to a possible career paths as a professional photographer and open up his own business or to become a social worker to work with kids who are in the same situation, he once was in.

“I really want to give back to the kids and I feel they deserve more,” he said.