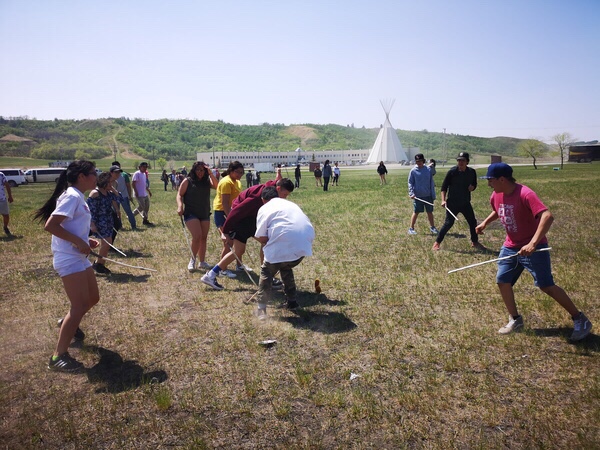 Youth playing double ball, one of the many activities at the Treaty 4 Education Alliance Youth-Led Forum held in Fort Qu’Appelle. Photos supplied by Lamarr Oksasikewiyin.

“It a lot to me, a bunch of students getting together in one big group,” said Nahbexie in a media release. “I wanted to see what ideas the youth wanted to share. I hope they take it home, what I’m about to say. I choose not to do any drugs and to go to school, that’s a choice that I made. I want to get out in the world as a leader. By becoming a leader, it’s given me the skills to move on with my dream, to the future career that I need, that I want. It makes me feel better to help people.”

Shanika Allary, a Grade 12 student from the same school as Nahbexie, led a session on Unhealthy Relationships.

“I hope people take the message, and try to use it in their life to tell people that there are more people out there going through the same thing you are going through. I want to make them feel safe, that there’s a safe place to talk,” she said. “Preparing for the session makes me realize that I’ve been through some stuff, and to get to know myself more, it’s opened me up. It makes me feel more confident, more out there, and not to be that scared of anything, to talk to people about this kind of stuff. I want to be a leader, for younger kids, for the youth, to help them out.”

The T4EA Student Engagement Coordinator Lamarr Oksasikewiyin said it was a time for youth to say what needs to be said during this youth forum.

“We know they have something to say and here’s a safe place for them to say it,” he said.

The T4EA signed a Letter of Understanding with Canada in December of 2017, and is working toward the establishment of an innovative model. Youth will be contributing their voice to T4EA’s development of a new model of lifelong learning based on Inherent and Treaty Rights.