In 2017, Kellie Wuttunee of Wuttunee Law Office was driving to Prince Albert from Kindersley after a meeting when she got lost and found something that made her stomach turn.

After getting lost, she turned on her GPS map and it showed she was beside a lake named KillSquaw Lake.

Once she was back in North Battleford, Wuttunee did research on the name of the lake and the oral traditional stories tied to it. With the consultation of the community, elders, advisory council, and the Heritage Name branch of the Government of Saskatchewan, Wuttunee started the petition to change the name of the lake. 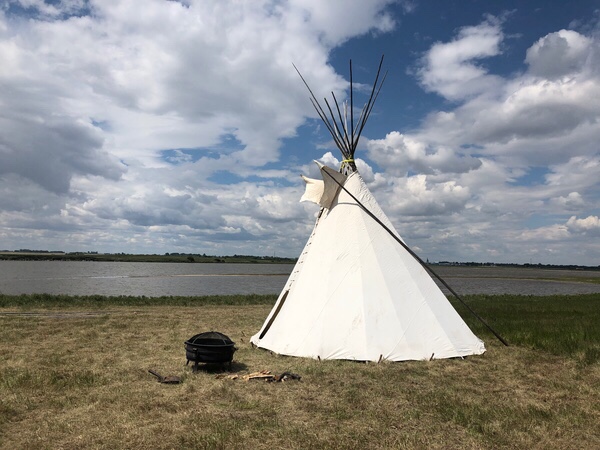 After consultation with elders, advisory council, ceremony, and the community the name Kikiskitotawânawak Iskêwak Lakes was chosen which means “We Remember the Women.” Photo supplied by Kellie Wuttunee

“The reason I did the renaming was to properly give the respect and honour to Indigenous women. We can no longer have historic places like this in Saskatchewan or Canada,” said Wuttunee. “The previous name was harmful and undermined the pride and self-esteem of Indigenous people.”

In October of 1974, Elder Anton Lonesinger explained in an interview that oral history says there were Cree women killed at the lake by Blackfoot. One survivor was able to go back to camp and tell the Cree warriors about what happened but when they got back, they found the women’s lifeless bodies.

“This renaming ceremony means the memory of these women will live on and they can be remembered in a more respectful way as part of Saskatchewan’s heritage,” said Wuttunee.

She believes that because of a mix of colonialization and Lonesigner’s English not being the best, translations were misinterpreted from “women were killed here” to KillSquaw Lakes.

Wuttunee also believes this was never an acceptable name for the lakes and does not want the younger generations growing up thinking this derogatory term is okay.

“By changing the name, we are giving a voice to the ones who were silenced. Words are powerful. Names are powerful. They inform our identity,” she said.

For Wuttunee, it was also important to change the name with the release of the Missing and Murdered Inquiry report, which lists 238 calls for justice.

“I hope they are recognized and affirmed in Canada and the country and provinces do their best to implement these recommendations from the Missing and Murdered Inquiry report.”

After consultation with elders, advisory council, ceremony, and the community the name Kikiskitotawânawak Iskêwak Lakes was chosen which means “We Remember the Women.”

A renaming ceremony took place on June 11 with a feast beforehand starting at noon.

Those in attendance were Bruce Dawson, Heritage Conservation Branch of the Ministry of Parks, Culture and Sport; Battleford Agency Tribal Chiefs; Battleford Tribal Council Chiefs; the Mayor of Unity; the local MLA; and Wuttunee.

Since the lake is by Compass Minerals Salt Mine just outside of Unity, they have given their permission to be on the land and have the ceremony.

“With actions like these, we are reminding each other and telling the world that we can learn from our mistakes and move forward together,” said Wuttunee.