A commemoration was held in Molanosa in northern Saskatchewan to mark 130 years since the signing of Treaty 6 Adhesion.

“It’s a special day and event to remember the treaties because of what they mean,” said Mirasty. “I am a member of the LLRIB so I’m closely connected to this commemoration but as a representative of the Queen, that’s also an honour because it represents the Queen and the agreements that were made during the time of the signing of the Treaty.”

The day kicked off by honouring the spirit and intent of Treaty with a pipe Ceremony then commenced with the new Treaty 6 1889 Adhesion Flag which was raised by First Nations Veterans.

“It took a lot of planning and coordinating to be where we are today. Having a commemorate plaque to celebrate and honour that our Treaty was signed 130 years ago and to have all the people come together,” said Chief Cook-Searson. “We have the Lieutenant Governor of Saskatchewan who is the first First Nations to be the representative of the Queen to be here with us with RCMP officers [who attended] are First Nations from our own First Nations . Times are changing. It’s happening, slowly but surely. We just have to keep at it and keep working on reconciliation and building that relationship together.” 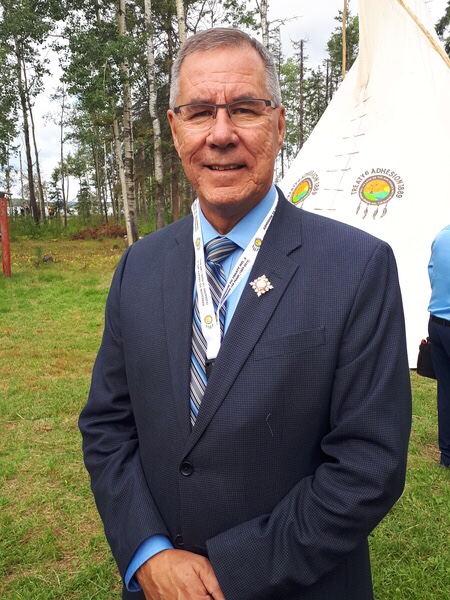 “[The commemoration] was a spiritual and cultural significance. There’s a relationship with the Crown that is being maintained,” said Chief Bellegarde. “Having the new Lieutenant Governor here is very significant…I commend the three chiefs and the leadership for bringing the people together from Treaty 6 territory to witness this significant event of showcasing their Treaty 6 Adhesion flag.”

There was entertainment from the Wapaw Square Dancers from the PBCN following the event luncheon. A panel on Reconciliation and the Treaty Relationship, presentations to dignitaries, acknowledgements, closing prayers, retiring the flags and supper followed by more entertainment was moved to the MLCN due to stormy weather. 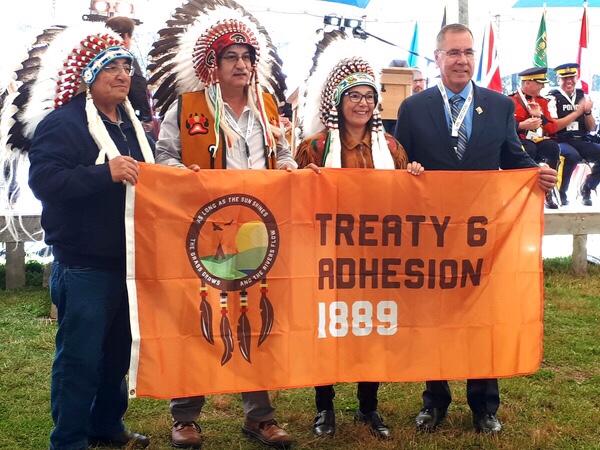 The Treaty 6 Adhesion was signed on February 11, 1889 on the northeastern shores of Montreal Lake. The traditional grounds of Molanosa are utilized every year where the three communities host “Molanosa Days” to celebrate with traditional foods, Woodland Cree dancing and coming together as a nation.