A member of the Lac La Ronge Indian Band has become Saskatchewan’s 23 and first Indigenous Lieutenant-Governor.

Former RCMP F Division Commander Russell Mirasty was sworn in as Saskatchewan's Lieutenant-Governor on the morning of July 18 at the Government House in Regina in a formal ceremony.

Mirasty formally takes over this position from W. Thomas Molloy who died from pancreatic cancer earlier this month. 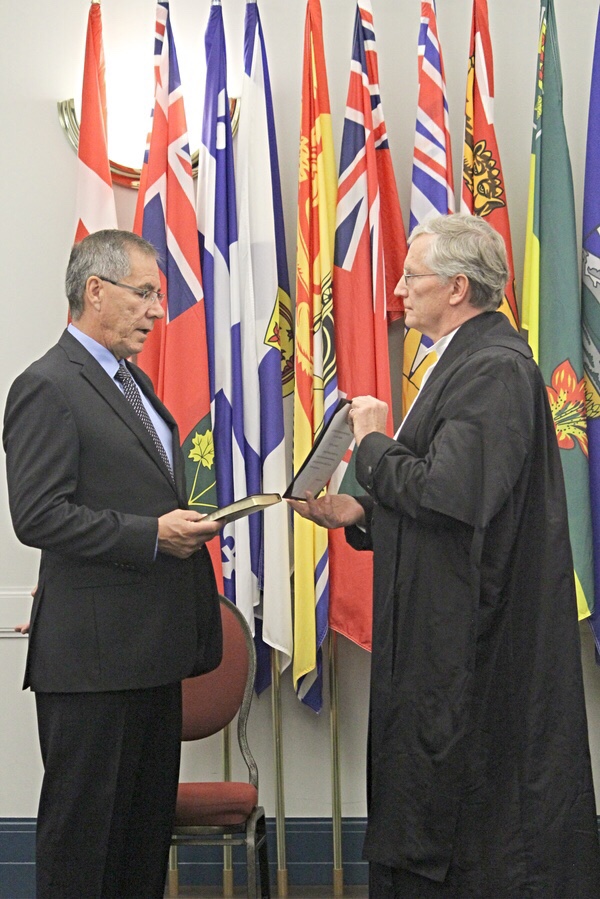 A formal swearing in ceremony was held at Government House in Regina on July 18 to make Russell Mirasty Saskatchewan’s 23 Lietenant-Govenor and the first one of First Nations descent. Photo by Kaitlynn Nordal

The Lieutenant Governor is appointed by the Governor General of Canada, on the recommendation of the Prime Minister. The person in the position serves for five years as a representative of the Queen in their respective jurisdictions and gives Royal Assent to new legislation.

“As Lieutenant Governor of Saskatchewan, I know will continue to make a difference for the people of his province and all Canadians, and inspire others to create change in their communities,” Prime Minister Justin Trudeau said in a press release.

Mirasty got the formal call from Prime Minister Trudeau on July 12 offering him the position, which he graciously accepted.

He feels this role is a tremendous responsibility but is looking forward to meeting the people of Saskatchewan.

Mirasty did acknowledge the importance of him being the first person of First Nations descent in the role.

“That is important to me personally (and) I think as well to the province. It will be meaningful to how I conduct my duties going forward,” he said.

He also feels that this is a step towards building relationships and reconciliation.

Mirasty, who was born and raised in La Ronge, believes this will be helpful to him in his new role.

“We are all a combination of our backgrounds, families, history and where we grew up and that’s no different for me,” he said. “But (it) certainly gives me an added perspective in terms of the province itself and the communities that are a part of this great province and it will be a great benefit.”

Premier Scott Moe was also in attendance during the swearing in ceremony.

Moe also thinks this is a step in the right direction to a better relationship between First Nations and Non-First Nations people.

“I think this is a historic day for our nation and certainly for the province of Saskatchewan having someone with not only Mr. Mirasty’s resume to come into this position but with his Aboriginal identity. It’s significant to where we are as a nation and a province,” he said.

Mirasty and Moe have already started speaking about some of the things they would like to make a priority for the future of the province.

“I look forward to working with Mr. Mirasty in official and unofficial conversations leaning on some of his insight for the benefit of the government but also the people of this province,” said Moe.

There will be a formal installation ceremony at some point in the near future at the Legislative Building.

“I offer congratulations to His Honour Russell Mirasty and welcome him as the Crown’s representative in my home region of Saskatchewan,” said AFN National Chief Perry Bellegarde in a media release. “I’ve said many times we need more First Nations people in positions of authority and honour. First Nations have a long-standing and unique relationship with the Crown, as embraced in our Treaties. We know Mr. Mirasty will bring a unique perspective to his new role, and we know he will serve all the people of Saskatchewan. He brings a wealth of knowledge and experience to the position of Lieutenant Governor and is a positive example of the success that everyone can aspire to.”

“It a proud day for First Nations people in Saskatchewan to see one of our own named as the Lieutenant Governor of Saskatchewan so quickly in light of our recent great loss,” said FSIN Chief Bobby Cameron. “This is historic, as this is the first Lieutenant Governor in Saskatchewan who is First Nations and the first fluent Cree speaker. The relationship in this province has been drastically harmed through systems, through ignorance and through hate. We have a Queen’s representative that is now one of the First Peoples of this land. Let’s start repairing our relations by being examples. Lasting change comes with political will.”

“I commend Prime Minister Justin Trudeau for his great insight on recommending the appointment of Lac La Ronge Indian Band member Russell Mirasty, as the new Lieutenant Governor for Saskatchewan,” said Chief Cook-Searson. “Mr. Mirasty is a nation builder and strong community leader. He is articulate in both his first language of Cree and English. We have always been proud of all his accomplishments and we look forward to this new chapter for Saskatchewan, Canada and the 23rd Lieutenant Governor, Russell Mirasty, Lac La Ronge Indian Band member.”