The critically endangered language of Dakota was at the centre of discussions and strategies from experts across Canada at the 2nd annual Dakota Language Revitalization Gathering held at the Saskatoon Inn. 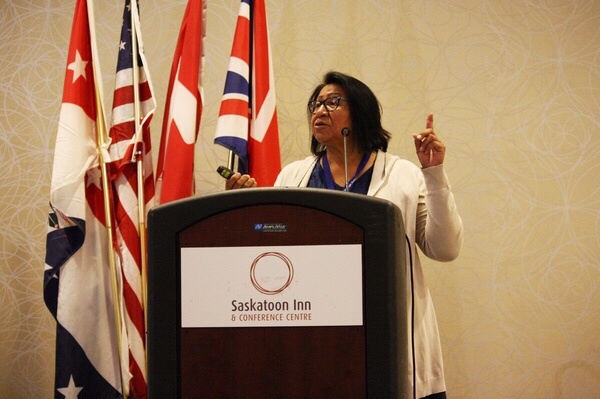 The theme of this year's conference, hosted by Chief Darcy Bear and Whitecap Dakota First Nation, was “stronger together” - to come up with support, strategies, and activities that ensure the survival of the Dakota language now and for future generations.

Dakota is spoken by the people of the Sioux tribes, primarily in the north-central region of the United States, as well as Saskatchewan and Manitoba. Despite an ethnic population of nearly 20,000, a 2016 study found that only 290 fluent speakers around the world, classifying it as a critically endangered language.

As such, the conference brought together several experts to share their stories of language revitalization. Allison Lemaigre, teaches Dene at an immersive Dene language program at Clearwater River Dene School. In the program, young students are taught Dene as their first language, and English is slowly introduced after Dene has been firmly entrenched.

“Slowly it starts being incorporated in everything they do. It's really important with language to be both consistent, and persistent,” said Lemaigre of her students.

In the final stage of their program, students may earn a four-year Bachelors of Education as Dene language specialists. Clearwater River is the only school in North America where students may learn an Indigenous language from their first days of school to the Bachelor level in the same building. They believe this approach will help support community language revitalization.

“We want to involve elders and parents at every level,” said Lemaigre. “We thought it was important to bring them in (throughout students’ education). And we’ve started incorporating more culture in the class, which is important as part of our identity.”

“A lot of First Nation communities have language revitalization activities happening in their community and have a state goal of wanting their language to survive. But the things they are doing, the strategies in place would never lead to the creation of a new speaker,” McIvor told Eagle Feather News. “The goals are one thing, but the strategies don't match.

McIvor said that common strategies like a once-a-week, 45-minute class is not going to create new language speakers. She believes immersion and bi-lingual education is key, despite Canada not supporting these sorts of immersive programs.

“Indigenous communities have never been supported to create programs like that,” she said. “But there is no one answer. It’s not that people just need education or funding (...) it’s understanding the spectrum of opportunities and finding the right entry point for your community.”

McIvor is doing exactly that, engaging with Indigenous communities and First Nations on language teacher training, creating a curriculum, engaging with parents, workshopping, and anything else needed to create a practical plan. She said that societal benefit of prospering Indigenous languages would be vast.

“There’s so much healing that happens in our language. Even if not all Canadians benefit from it directly, they will benefit indirectly from all of our society doing better.”