Bethlehem High School Grade 12 student Elger Pakingan did not think he could draft federal legislation, but as the winner of MP Sheri Benson’s “Creating your Canada Contest” he did just that. 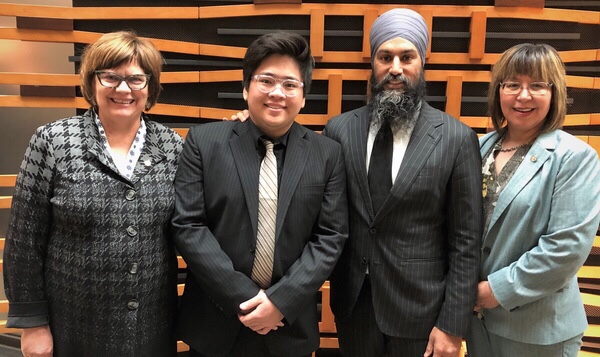 “The bill was about Aboriginal language rights,” said Pakingan, adding he chose this topic because he realized these languages are starting to disappear. “A major reason for this is the forced assimilation of the Aboriginal peoples...this has prevented the passing on of languages.” He said a bill to protect this and document it would be perfect, and the experience of participating was awesome.

“This was a once-in-a-lifetime kind of thing, I didn’t think I would ever get to experience proposing a bill and seeing it lobbied in the House of Commons,” he said, adding it was tougher than he thought it would be. “The amount of manpower and teamwork is really amazing and I am thankful for everyone who helped shape the bill.”

He advises other youth to learn from history so that we can do better, noting that it is ignorant saying the past is in the past: because it still affects the present and the future. He is grateful to Sheri Benson and her team for giving him this opportunity.

“The contest is in its second year...students are to suggest a piece that would implement one of the Truth and Reconciliation Calls to Action,” explained Benson, adding her colleague Nathan Cullen in BC has been doing the contest for over 10 years.

“The thing that really grabbed me about it was an opportunity for young people to seek some relevance in their lives of the things that happen very far away in Ottawa.”

Benson adds many people never come to Ottawa or see the House of Commons at work, so participating in making new legislation into law creates relevance for young people. Elger’s law is similar to Bill C-91, with improvements made by community members and those who presented to the committee, including clauses that the Indigenous language commissioner be Indigenous, that the 60’s Scoop be mentioned as detrimental, and that the UN Declaration on the Rights of Indigenous Peoples be inserted into the text as a binding part of the bill.

“So it’s been tabled...and it would really improve the government’s bill and make it even better, so we’ll keep plugging away and see if that happens,” said Benson, adding that she hopes to continue the contest because it helps high school students feel connection and relevance to politics and government. “It’s a real privilege to bring students to Ottawa.”