When it comes to dealing with every day life, it can be easier to turn to alcohol or drugs as a coping mechanism. But, for the newly elected chief and council of Mosquito Grizzly Bear’s Head Lean Man First Nation using these vices was not an option if they wanted to lead in a positive way. 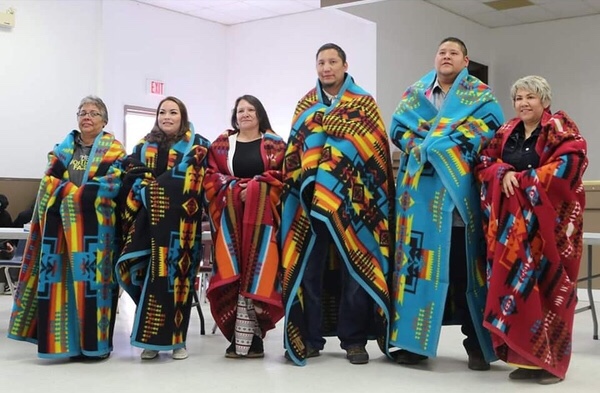 The newly elected Chief and Council of Mosquito Grizzly Bear's Head Lean Man First Nation pose for a picture after the reading of everyone’s drug and alcohol test came back clean. This was an important step for them to show transparency and accountability in their decision making. Photo by Michelle Daniels.

Newly-elected Chief Tanya Aguilar-Antiman and Councillors Laurie Ann Moosomin, Deborah Stone, Brenda Mosquito, Tristan Bird and Kyle Stone had their swearing in ceremony on May 7, and on May 21 at their first band meeting, they were already discussing taking a drug and alcohol test.

This was a unanimous decision by everyone, with tests taken on the 10 or 11 and results read, revealing everyone passed at a band meeting on the 12.

“When the recommendation came forward, we all agreed it would be volunteer and we all passed,” said Chief Tanya Aguilar-Antiman. “It demonstrates a group of people coming together and growing together and walking the talk. I think it’s a positive move for our entire nation.”

Being clean and sober was also something important to her on a personal level.

“It’s something that is important to me personal and professionally, leading a positive and healthy lifestyle. It was something community members had been expressing for a long time. So, when the opportunity arose as chief, I wanted to walk the talk,” said Aguilar-Antiman.

Aguilar-Antiman, who grew up in the community, said that 30 years ago one of the biggest problems in the community was alcohol and now it is crystal meth. After speaking with elders and listening to community members express their concerns, the newly elected chief and council knew they had to lead by example not just for those trying to get clean, but for the younger generation watching them.

For councilor Deborah Stone, this was more than about being a good role model and making decisions as a sound mind and body. It was also about addressing her own addiction issues.

“For me, it was a big issue because I was a weed addict,” said Stone. “I smoked regularly every day. When I got voted in, I quit cold turkey. For me that was a big deal to show the members that it can be done.”

Aguilar-Antiman hopes this is a step in the right direction to not only get the community talking about addiction issues but to also make a better future for everyone there.

She also said this is something that chief and council are going to consider doing in the future and hopes it ripples into other areas of the community such as the education sector and band office among others.

Stone is proud of her choice to do this and encourages other First Nations to do the same not only transparency and accountability reasons but to simply make the hard choices they have to with a clear mind.