Saskatchewan’s Minister of Social Services Paul Merriman, along with other officials, met with the federal Minister of Indigenous Services Seamus O’Regan, as well as national groups such as the Assembly of First Nations. Merriman addressed the media stating that he and his provincial counterparts are feeling left out of Ottawa’s plan to reform child welfare and wanted to speak with O’Regan without any Indigenous organizations present.

These comments were fired back with reaction from the Federation of Sovereign Indigenous Nations (FSIN) on Friday, April 26.

“It’s unfortunate that this is their (Saskatchewan Ministry of Social Services) way of doing business,” said FSIN Chief Bobby Cameron in a media release. “However, our sources within the Saskatchewan Social Services Ministry informed us of their refusal to include Saskatchewan First Nation leadership weeks ago, and even they were ashamed of the Provincial Government’s lack of inclusion. If they are serious about apologizing about past mistakes, then inclusion is the only option because this would prove they are serious and speaking words that hold truth.” 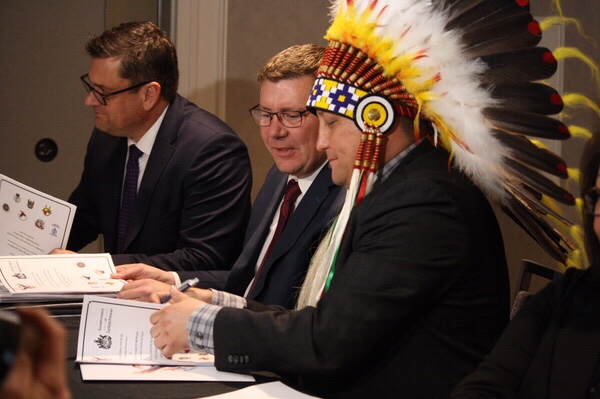 Minister of Social Services Paul Merriman (far left) has since responded and clarified his comments around wanting to meet solely with federal and national Indigenous representation. Stock photo

FSIN said that Minister Merriman’s recent comments about being unable to speak with the Minister of Indigenous Services without the inclusion of First Nation representation highlights the troubling stance of the Province of Saskatchewan with regard to respecting the jurisdiction of First Nations over their children. The Minister’s remarks show that he does not see the importance of relationship building as paramount in Nation-to-Nation reconciliation.

“They have apologized for the 60’s Scoop yet would not work with us on putting a moratorium on permanent guardianship and adoptions of our children,” said Vice-Chief David Pratt. “You don’t apologize and then continue with business as usual with taking our children away. This government continues to ignore the needs of our children and we will succeed where they have failed.”

Chief Bobby Cameron also stated that the “Provincial Government continues to fail because they do not understand, nor can they can fully comprehend how our First Nation’s Elders and families can help restore our children’s self-esteem, culture, language and identity back to the way it was before Provincial Government interference. Our Treaty and Inherent rights are to be respected at all times and each First Nation will assert their own jurisdiction over their children as they see fit.”

One of the items discussed was Bill C-92, “An Act respecting First Nations, Inuit and Metis children, youth and families.”

Minister of Social Services Paul Merriman responded in an email statement to clarify his comments.
“Myself, and my Provincial and Territorial colleagues were glad to have a conversation with the Federal Government and the National Indigenous Organizations,” he stated. “In addition to these conversations, Provinces and Territories wanted to have a separate conversation with the Federal Government about the implementation and timing of Bill C92, particularly relating to how it will affect our existing agreements and operations. As current agreements are held at the Provincial level, Provinces felt it would be appropriate to communicate directly to the Federal Government the importance of current agreements that are in place with our respective Indigenous partners, and how this legislation will affect them.”
Merriman added that he had received the letter from Chief Bellegarde and recognize that “lobbyist” is not the correct word in communicating the important role of National Indigenous Organizations in this discussion.
“My intention was to convey their role as an active party in this discussion that is seeking change to the current system,” he said. “As Minister, my aim is always to put the child first with every action that is taken by our Ministry. A recent example of this is the new agreements we signed with Saskatoon Tribal Council. Together in this agreement, we have put children first and began a journey together toward our shared responsibility to protect the best interests of our children and families for generations to come.”