Standing Buffalo Dakota Nation recently elected their first ever woman Chief to lead their community for the next three years. A powwow was held this past weekend in the community and Chief Roberta Soo-Oyewaste addressed her community and welcomed visitors.

“On behalf of my council, we are honoured here. A majority of women have been elected and we’re taking this with great pride and to be there for our Oyate and to hear them,” she said. “To the women out there, don’t be afraid to take steps to speak up for yourselves and to be strong. We took a risk because we saw the need for our nation to grow and we want that to happen for our Oyate.”

Chief Soo-Oyewaste said it is an honour and a humbling feeling to be recognized as the first woman chief of her community. 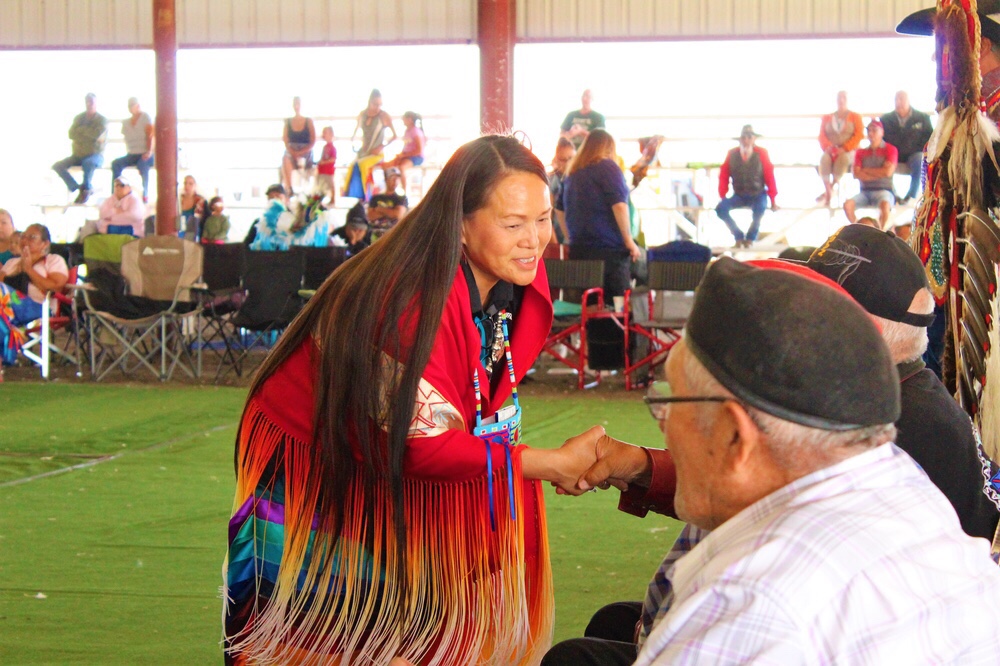 “[I’m] embracing this opportunity for not only myself but other women in the future,” she said.

“We are the matriarchs, the backbones, we’re the organizers, we’re the knowledge keepers and we’re not afraid to work together to build our community for reconciliation and healing,” said Chief Soo-Oyewaste who added that her mentors have been Indigenous women and her community elders.

This is Jean Redman’s first term as councillor and said she really loves it.

“We have a great team. We can make movement,” said Redman. “I wanted to run as our people have been so neglected in the past that I want to spend more time with them…I want to do my best for the people.”

This is also Beckie Yuzicappi’s first term on council and she said it’s exciting and quite an honour.

“I look forward to working and building relationships and partnerships with our community, looking at areas of health and healing, development and anything that would benefit our community,” said Yuzicappi. “I have always looked at many mentors in my life and they have been strong women…watching them has always inspired me to become that kind of role model. You represent your family [as a community leader] and you try to role model that lifestyle of drug and alcohol free to promote health and wellness.”

Chief Soo-Oyewaste and councillors were elected in on July 26th and were sworn in as their community leaders during the first week of August. Standing Buffalo Dakota Nation is located 11 km west of Fort Qu’Appelle and has a total population of 1,200 band members on and off reserve.