Moe Morin is a freelance writer and photographer and the co-founder of Humans of Saskatoon. She photographs and interviews people and run their stories on her highly popular Facebook page. This month she talked to Australian activist and senior leader Witiyana Marika after he was presented a Métis sash at the WIBF by Métis Nation-Saskatchewan Senator Nora Cummings. 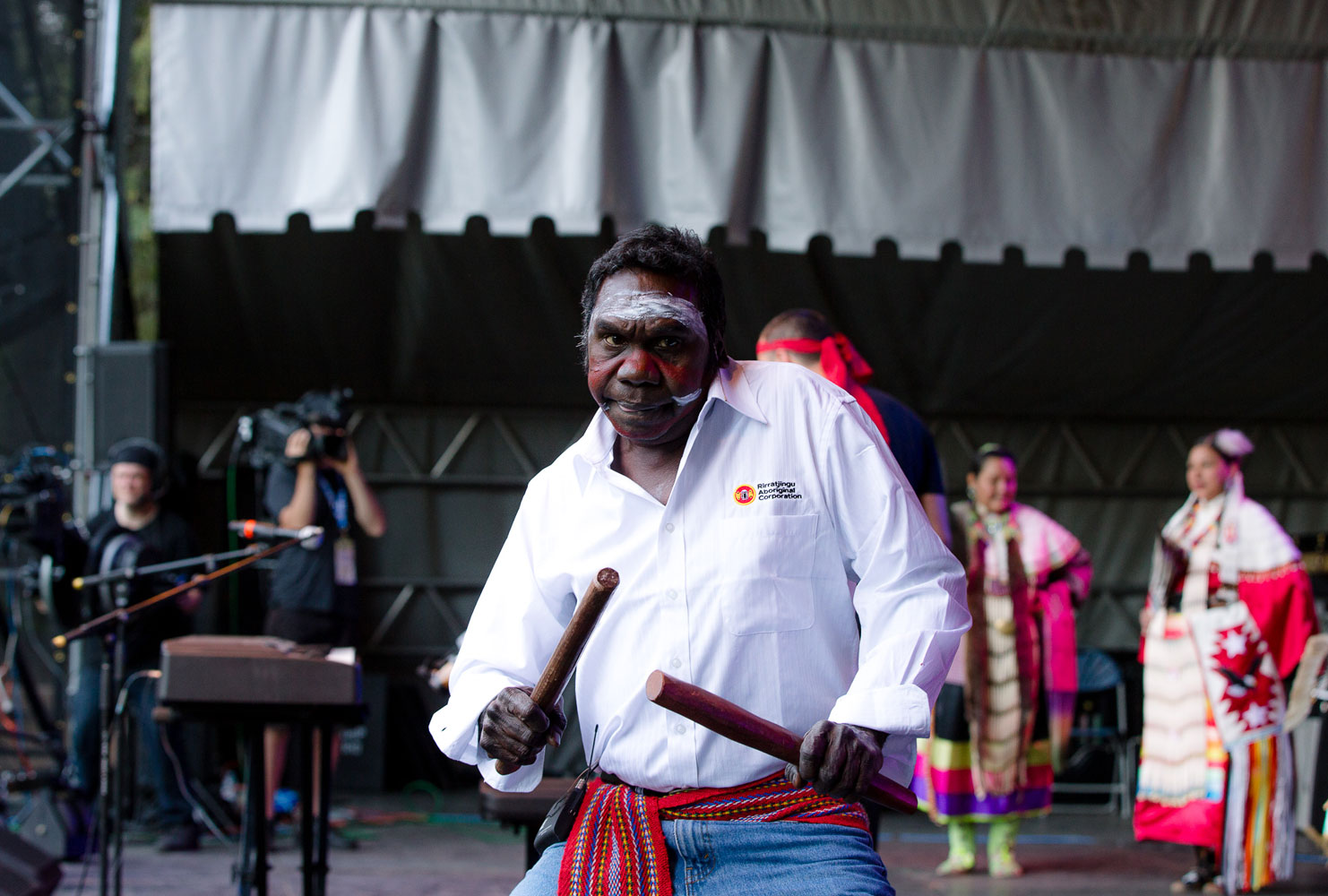 For more SWIFFA photos by Moe Morin, check out our Photo Gallery.

I received the sash from Senator Nora Cummings at the World Indigenous Business Forum at TCU, as an honour.  I had mentioned I was the son of “The Father of Land Rights”, Roy Dadaynga Mirika. My father fought for land rights, and was involved in a famous court case, Milirrpum v Nabalco Pty Ltd., (big mining company). We are now still fighting for the rights, and my father lost this battle back in the late sixties, and early seventies. He (my father) was fighting for land in the Northern Territory against the Australian government along with his brother’s, and they lost this battle. Back in 1970 in Australia, my father was presented with a sash, and again when he arrived back into Ottawa, Canada in 1990. Senator Cummings gave my father the sash back in 1990, and she called him a diamond because of the things that he did, fighting for our people and land now she has presented me with one. A lawyer by the name of Wilton Littlechild met with my father back in the seventies in Australia because he had heard my Dad was a fighter. My father wore this sash very proudly, and in 1993 he passed away. My name is Witiyana Marika, and I am a senior leader, and here representing my clan, chosen by the Elder’s to represent our nation. Back in Australia, I do as my Elder’s tell me. I was a former rock star, and founder of Yothu Yindi, the first Aboriginal band that hit Australia that hit the stage in 1990, debuting a song called “Treaty”. 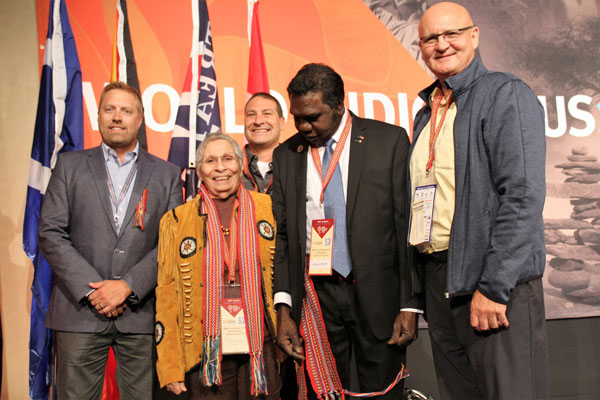 The Australian sash presentation at the WIBF in Saskatoon last month. Photo by Leona McIntyre

In the contemporary world, I do work that needs to be done (I work for the Rirratjingu Aboriginal Corporation) but in our world, I do what I am told through traditional ceremony and ceremonies guided by my Elder’s. Nelson Mandela was a winner, and a freedom fighter; he fought for everything and he was a champion. He was victorious. In the 1990’s, a group of South Africans toured in the area of Darwin, and the group was called Amandla!, they toured through the country; they protested around the world (anti-apartheid songs). They had a beautiful sound. If only Nelson Mandela could have stayed a little longer, and would I have loved to meet him. Back in 1992, we toured in America and were filming a documentary about “Tribal Voice” our new song and album. John Trudell toured back with us in 1988, and he was a poet, activist (American Indian Movement), Yothu Yindi, and Midnight Oil; we were protesting the Bicentenary year in Australia, and we boycotted that celebration. We then took a trip, the songs and made a tour into the big mountain (North America). John Trudell was not only a poet, a fighter but a rock star. Part of the footage can be seen in on “Into the Mainstream” back in 1988. In the clip, in not only shows Australia aboriginals but indigenous people of the world.  My nation’s totem is the King Brown (snake), and we will be attending the next Indigenous Forum in Chile with more representatives, including dancers. (The Rirratjingu Aboriginal Corporation represents the Rirratjingu people - who are the Indigenous Traditional Owners of Land on the Gove Peninsular – Facebook Page).